Will one of these Cygnets Develop into a Black Swan?

Home/Will one of these Cygnets Develop into a Black Swan?

Will one of these Cygnets Develop into a Black Swan? 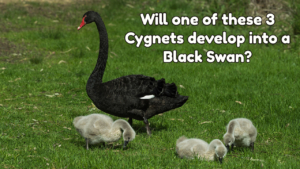 As most are aware, a cygnet is a baby swan. Well we have identified 3 cygnets which have the potential to develop into 3 fully grown black swans, an analogy or metaphor for surprising and significant events to come – and not good ones at that.

It come as no surprise that John Bolton, President Trump’s National Security Adviser, is a hawk on Iran and many have attributed to him, a desire to create war with that country.

To date, the President has stated that he has no desire for war with Iran with comments such as that he has had to reign in some of John’s more extreme views by being a moderator on the issue.

In an interview with Fox News broadcast yesterday, the President vowed that he would not let Iran develop nuclear weapons but said he did not want a conflict.

“If Iran wants to fight, that will be the official end of Iran……. Never threaten the United States again!”

A sharp divergence from his previous protestations and we must be mindful that the US has deployed additional warships and planes to the Gulf in recent days.

Now we are not expressing any judgement on whether he is right or wrong to do this, what we are suggesting is do not assume that the President’s policy on Iran, and its response to him, naturally leads to peace. Of course, it could be just posturing, however we cannot entirely rule out Bolton getting his own way. This one issue is probably the most profound in terms of geopolitics – at least for the moment.

We have already reported several times that trade tariff issues and tensions with China have been escalating with both the US and China increasing the size and scope of tariffs on each other, in recent weeks. However, what should not go unnoticed is the battle with the Chinese telecom’s firm Huawei.

Last week we reported that the Trump administration added Huawei to a list of companies that American firms cannot trade with unless they have a licence.

China hit back stating there would be repercussions as the US were just using this excuse to leverage its position in their trade war.

Well it was reported this morning that Google has barred the world’s second biggest smartphone maker, Huawei, from some updates to the Android operating system, dealing a blow to the Chinese company. New designs of Huawei smartphones are set to lose access to some Google apps.

Google has publicly stated that it was “complying with the order and reviewing the implications”.

In addition, The US has warned that its intelligence sharing with other countries would have to be re-evaluated if those countries use Huawei to build their 5G networks. Senior US official Rob Strayer said any such role for the firm posed an “unacceptable risk” to security.

It has been reported that the UK might allow the Chinese telecoms firm into the non-core parts of its 5G network and if this goes ahead, we can see conflict in terms of UK/US Intelligence sharing which has already been damaged to some extent by the Steele dossier.

This conflict between the US and China is serious and we have been advised that some close Trump associates are of the opinion that it would cement his core base if this dispute continues into the 2021 election period. Others have stated that it could also cause untold damage to the Party and that many of Trump’s base would be affected.

We shall have to wait and see, but certainly do not assume that the issue will be resolved quickly. We are of the opinion that it is in both China’s and the US interests to settle these matters even if both sides do not get exactly what they want but come close. However, it is essential for President Trump to ensure that he wins the next election and so quite frankly anything is possible.

The Mueller Report has been published (albeit with redactions) and the House of Representatives – now controlled by the Democrats – are unhappy with these redactions and have issued subpoenas calling for Government officials testimonies and documents including full sight of all redactions –which to date, have been more or less thwarted by a Whitehouse that has declared that it will not cooperate on matters relating to the Special Counsel Investigation with the House any further.

This will inevitably lead to court cases and the formal declaration of impeachment proceedings which gives the House additional powers of subpoenas and access. Now we all know that even if the House of Representatives are successful in impeaching the President it has to be enforced by the Senate – which is Republican dominated, and so is not going to happen.

However, the Democrats believe that the more information they can reveal to the public showing either Trump or his Administration’s wrongdoing, the more likely he is to be voted out of office. The Administration believes that the more the Democrats go after them the more likely they are to win the election based on the premise that this ‘witch hunt’ will be sufficient to galvanise supporters.

There is also an underlying imperative here for the President which some have muted, but not concentrated on, and frankly overarches all of these antics. It is the Department of Justice’s rule that a sitting President cannot be indicted but a Past President when out of office can be.

It is quite possible that Donald Trump is an unindicted co-conspirator in the Michael Cohen case concerning hush money payments. Without going into too much detail e.g. obstruction of Justice accusations – there is no doubt that there are numerous lawsuits brought in by State and Federal courts by individuals, companies, and State Attorneys General against Trump personally and in his role as President.

Also his company, the Trump Organization, his charity, the Trump Foundation, and his three oldest children also face lawsuits and are in jeopardy of not only fines but imprisonment too.

Now whether all of this comes about is not the issue we are making. It’s the fact that the President knows that if he is voted out of office in 2021, he becomes legally vulnerable and he will also not be in a position to protect his children via pardons if they are successfully indicted.

It is therefore imperative for him and his family that he is re-elected – as another term will eradicate the majority of these potential indictments on the grounds of statute of limitations. The Federal Statute of limitations is 18 USC 3282 which states:

‘Except as otherwise expressly provided by law, no person shall be prosecuted, tried, or punished for any offense, not capital, unless the indictment is found, or the information is instituted within five years next after such offense shall have been committed.’

Now we hear you ask why is this a potential black swan? Well one has to ask the extent to which President Trump, or any President in his situation, is willing to go to, in order to ensure re-election.

Now whether President Trump will do any of these is open for debate and we shall just have to wait and see. However even operating legally, one can be forgiven for thinking that he may, at the very least, encourage trade and political disputes in order to galvanise a base or seek out foreign assistance in the next election – the result of which he will be so dependent upon in 2021.

So, will any of these cygnets develop into an adult black swan or are there others lurking around the corner? Of course, the whole essence of the black swan analogy is that they are unseen until they appear and perhaps the fact that we anticipate some mean that the three we have expressed may indeed not happen.

Whether they do or do not, one thing is for certain. The next few months are important and the run up to the Presidential election in 2021 even more so. We can expect market turbulence before then because of these 3 cygnets but be mindful others also lurk in the shadows such as North Korea, Syria, Israel, Venezuela, Brexit, the EU etc.

Whatever comes to pass, it need not be disastrous, but will in our view, be turbulent. This morning is relatively quiet with gold down $2 at $1275 and silver is level at $14.40. Listeners know that it is our view that these levels will go lower in coming weeks, but these cygnets could indeed derail any downward pressure and cause precious metal prices to rise – whether they will or not remains to be seen – the question is not Shakespeare’s Hamlet:

“to be or not to be” but is Illuminati Silver’s “black swan or no black swan”.