Why oil prices will eventually fall – but not just yet

Home/Why oil prices will eventually fall – but not just yet

Why oil prices will eventually fall – but not just yet 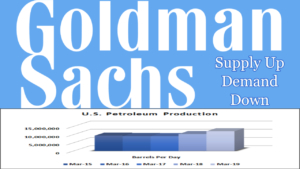 On 12th June, our latest video on the subject entitled

“Oil Demand Down – Recession on the Horizon?”

(we have placed a link  below)

We stated that Reuters reported:

“World oil markets have undergone a U-turn, switching from supply-side risks like OPEC’s production cuts or U.S. sanctions against producers Iran and Venezuela, analysts said, to concerns of slowing consumption amid fears of a global recession……. As a result, crude oil prices have turned a 45% price rally in the first four months of the year into a slump of more than 15% since late April.”

“U.S. investment bank Goldman Sachs said on Wednesday that weakening economic growth and lower oil demand expectations were “the largest driver of the move lower over the past month” in crude oil prices.

And with the outlook dim amid trade disputes – especially the one that has led to an expanding exchange of tariffs between China and the United States – analysts have revised down their oil demand growth forecasts.”

Energy Consultancy FGE revised their global oil demand forecasts down from 1.3 million barrels a day to 1 million barrels; Barclays Bank did a similar projection and Research firm TS Lombard expressed concerns that an unresolved Sino-American trade war “has the potential to trigger a recession in 2020, if not before.”

So why are we commenting again today you may ask?

Well yesterday morning, Reuters came out with another report which states:

‘Goldman Sachs said growth in U.S. shale production is likely to outpace that of global demand at least through 2020 and limit gains in oil prices despite output curbs led by the Organization of the Petroleum Exporting Countries.

The Wall Street bank forecast U.S. oil output growth at 1.3 million barrels per day (bpd) and 1.2 million bpd in 2019 and 2020 respectively, which compared with its global demand growth expectations of 0.8 million bpd and 1.6 million bpd respectively for the same periods.’

Now we are all aware of the manipulation of the oil market; where essentially OPEC members agree the level of oil production and therefore price.

To some extent, they have enabled the US to compete with them in this market without affecting price too harshly by cutting their own supplies. In fact, Goldman Sachs predict, that despite this news of increased US production, prices will remain more or less unchanged at $60 per barrel for Brent and $55.50 for WTI.

Now it was only a little over 3 years ago – in fact January 2016 when Brent Crude prices fell below $30 a barrel, and we stated then, when others thought prices would collapse to below $15, that the true price of oil, which was sustainable, was in fact around this $30 level, but we felt that prices would eventually rest between $50 -$60 and we held this ground even when prices rose back above $80 a barrel in October 2018.

This $50 – $65 a barrel Brent Crude price and around $5 cheaper for WTI is an acceptable ‘sweet spot’ for these oil companies. However, for Industry, the reality is that it is paying more than it needs to. Saudi Arabia can in fact produce oil at below $10 per barrel, while other countries can do so at between $30 – $40 and Shale oil producer costs range from $40 to $90 – though these are falling with new technology and innovation.

So, this is why that $60 level is so protected, it makes enormous profits for Saudi Arabia and other OPEC countries and enables the US Shale Industry to grow and expand to the point that the US is now self-sufficient in oil if it needs to be.

For us the consumer it’s a ‘bummer’ – that’s a technical vernacular banking term for ‘a shame’.

With oil at $30 – $40 a barrel, industry costs would plummet, precious metal mining companies would see their costs significantly reduce, enabling them to extract precious metals at much lower prices, and the freight and cargo industry would boom.

On the flip side, whilst cheap oil is great for American and world consumers, it would lead to stock market falls, especially energy company shares quoted on the S&P 500 and US domestic oil industry workers would also suffer.

On balance though we believe the world would be better off with lower oil prices, as its price is reflected in so many of the items, we both import and export. In reality though, that ‘sweet spot’ is likely to be retained even though global oil demand is down and there is frankly far too much supply.

We can, over the next few months, witness this battle between producers, such as the US Shale oil companies competing with OPEC, and our overall prognosis is that eventually prices will have to fall. It may take a year or two, but the math is indisputable – too much production, and weakening demand.

One thing we know for certain, save any major manipulation or war that is, high supply, lowering demand, and a move away from oil technology especially in the automobile sector can only point to one direction for prices – the question on everyone’s lips, is when?

“Oil Demand Down – Recession on the Horizon?”