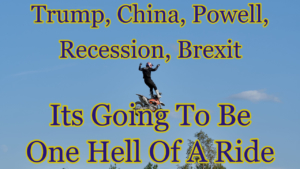 Today the Fed Chair Jerome Powell spoke at the Jackson Hole symposium and boy did it get a reaction!

But before we go into that let’s just share a brief historical renaissance as to what this symposium actually is.

Each year since 1978, the Federal Reserve Bank of Kansas City has sponsored a symposium on an important economic issue facing the U.S. and world economies.

The participants convene to discuss the economic issues, implications, and policy options pertaining to the symposium topic. The symposium proceedings include papers, commentary, and discussion.

This year the 2019 Economic symposium, taking place between August 22nd and August 24th in Jackson Hole Wyoming has the title:

“Challenges for Monetary Policy,” and today, Fed Chair Jerome Powell, made a number of revealing remarks which attracted the mire and anger of President Trump.

So, what was it that Powell said?

Well Mr Powell stated, that trade tensions were hitting the global economy, and the Fed didn’t have a “rulebook” to deal with the fallout. His exact words were:

“there are no recent precedents to guide any policy response to the current situation and monetary policy cannot provide a settled rulebook for international trade.”

From a Bankers perspective he is of course quite correct; in that Central Banks have no determination over tariffs, quotas or any specific trade deals agreed. He is slightly inaccurate however, in that of course the value of the currency and level of interest rates can have an effect, but usually it’s the political agenda that dominates here.

He cites very clearly, that the FED will “Act as appropriate to sustain economic expansion” but then highlighted a deteriorating outlook on the global horizon – mentioning Germany, China, the fall of the Government in Italy and Brexit.

On the positive front he stated that the US economy was in a “favourable place,” highlighting good jobs growth, higher consumer spending and rising wages; but then listed a series of economic and geopolitical risks linked to Mr Trump’s trade war with China including; the fall in Business spending and the recent figures showing a decline in manufacturing.

He made it very clear that the ‘Big Things’ were Global weakness and Trade Policies and their effect on the US economy.

His comments on inflation were most interesting in that he pointed out that inflation is “moving up towards the 2% target and within range of the FED’s Goal”.

This is relevant in that previously it was suspected that lower rates would certainly be necessary to prevent falling inflation, and that does not appear to be an issue right now. This was further supported in a footnote given with a copy of his speech which stated:

‘Not for the FED to adjust policy to transitory developments in inflation.’

During this symposium, it was reported that China announced plans to impose up to a 10% tariff on $75bn worth of goods imported from the US, in retaliation to President Trump’s envisaged additional tariffs on all of their goods.

China’s new tariffs will range between 5% and 10% and will apply to more than 5,000 goods coming from the US with; Agricultural goods, crude oil and small aircraft, are among the products being targeted.

Beijing will also revive a 25% tariff on US car imports, that it lifted earlier in 2019 in a goodwill gesture as the two countries tried to negotiate a trade agreement.

This immediately resulted in the President declaring in a tweet:

“Our great American companies are hereby ordered to immediately start looking for an alternative to China, including bringing your companies home and making your products in the USA……I will be responding to China’s tariffs this afternoon.”

He also had some choice comments for Jerome Powell – asking the question:

If the Federal Reserve Chairman Jerome Powell was a greater “enemy” than China’s leader Xi Jinping.

This sent a shudder through stock markets, and we immediately saw gold and silver prices rise on the news and the dollar fall.

Now this situation is fluid, and we are still awaiting additional measures to be announced by President Trump, but at this precise moment;

The Dollar index is down half a point at 97.6

Gold has risen some $30 dollars since the announcement, and stands at $1,529

And Silver rising also significantly to $17.47

If ever the Fed Chairman’s comments were prophetic, it was today, and as he has stated – he has no ‘rule book’ for this situation.

Mark Zandi of Moodys Analytics believes that the FED will cut rates 2-3 times this year and another 3 times next year because of the trade war and its effect on manufacturing output.

Jason Furman Chair for the Council of Economic Advisors states that he believes that Jerome Powell doesn’t quite know what he will do on interest rates as the data will determine his next move.

Gita Gopinath of the IMF pointed out that there are many risks on the trade front and uncertainties surrounding it. Industrial production and manufacturing are weak, and services are holding up, but are also weaker compared with the start of the year.

The situation looks bleak and the Trade war – as we have stated previously, is heating up with neither side backing down for the moment. President Trump, we believe will force the FED Chair to reduce rates by making the trade war ‘white hot’ and adversely affecting the US economy short term in order to attract that additional stimulus – though we believe it is a highly risky policy with unknown outcomes.

For gold and silver, this will only help their position in US dollar terms and in our update tomorrow we shall have the benefit of knowing what additional measures the President will have enacted or promised to retaliate against China.

So, hold on to your hats, its going to be one hell of a ride and who said the President’s tweets didn’t matter?