Today is a Day for Politics

Home/Today is a Day for Politics

Today is a Day for Politics 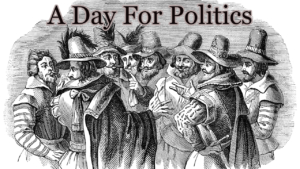 At the time we established our you Tube channel back in March 2015, there were a host of channels talking about silver and occasionally gold. They focussed on; these attractive shiny pieces of metal, emphasised that now was the time to buy, and generally, to be fair, revealed to their viewers, new and interesting coins and bars as and when they were released.

Our channel was to be something different. Not coming from a bullion dealer background or necessarily being enthusiastic stackers, caught in what was then, the tail end of a silver collecting bubble, we realised that there were individuals out there who wanted something more.

These were perhaps, in the main, more serious collectors and enthusiasts, who wished to understand the factors underlying the price changes in these metals – what influenced those prices, and to a large extent, when was the continuing reduction in prices likely to stop and a new bull market begin.

We very clearly highlighted the 5 main factors which affected price –

Now we have not included a 6th the one key factor which, according to bullion dealers and pumpers, was virtually the only reason given for price and that was manipulation – and often cited as government manipulation – whereas we would argue that whilst there was and is an element of that, trading manipulation by greedy traders, and in some cases banks, were of a greater manipulative effect.

Anyway, since our channel became noticed, a number of the channels who existed before us, started to copy our model, and more recently a slew of channels have jumped on the bandwagon, and are now talking about the same things – the difference we would argue – is that we are doing so from a position of 40+ years of knowledge in these fields and some of the others, from merely repeating what the ‘pumpers’ – with their considerable financial resources – are spewing out day after day – which is a shame but that is the politics of this business.

Bullion dealers need to sell bullion to create profits, and therefore will at best, hyperbolise, and at worst, lie about where the economy sits, and create conspiracies where either none lay, or alternatively may exist but at a much lower level, or to a lesser extent than they paint – working on the knowledge that whether it be 5 years or 10 years or 20 years when they are wrong, that one day, they will be right, and then say ‘told you so’ regardless of the financial damage they caused to individuals going all in, far too early, on the expectation of an imminent global financial collapse.

This is the politics of this industry but is only a small part of the politics which we are covering today – as today Wednesday 24th July 2019 is indeed a day for politics – and let us explain what we mean.

Yesterday, the result of the UK Conservative Party’s election for a new leader was announced. This individual aka Mr Boris Johnson, will today travel to Buckingham Palace, be met by HM the Queen and become Prime Minister of the United Kingdom – fulfilling a lifelong ambition.

He was the MP for Henley from 2001 to 2008, then Mayor of London from 2008 to 2016, elected as the Member of Parliament (MP) for Uxbridge and South Ruislip since 2015 and from 2016 to 2018 he served as Foreign Secretary. Johnson identifies as a one-nation conservative and has been associated with both economically and socially liberal policies.

Born in New York City to wealthy upper-middle class British parents, Johnson was educated at the European School, Brussels I, Ashdown House, and Eton College. He read Classics at Balliol College, Oxford, where he was elected President of the Oxford Union in 1986. He began his career in journalism at The Times but was sacked for falsifying a quotation.

He later became The Daily Telegraph’s Brussels correspondent, with his articles exerting a strong influence on the growing Eurosceptic sentiment among the British right-wing.

In 2016, Johnson was a prominent figure in the referendum on Britain’s membership of the European Union, becoming a leading figure in the successful ‘Vote Leave’ campaign, though critics stated behind the scenes, that if it had been politically expedient for him, he could have easily led the ‘Remain’ campaign instead.

He has also been criticised by figures on both the left and the right, who have accused him of elitism, cronyism, dishonesty, laziness, and using racist and homophobic language – some of the accusations similarly levelled against President Trump.

Johnson is an important figure – certainly for this moment in time. He has advocated that whether it be a hard Brexit or not, Britain will be departing the EU on 31st October 2019 ‘come what may’. This means that his relationship with President Trump will be of paramount importance, as a new trade deal with the US will be essential for the UK, so as not to suffer too adversely when it withdraws from the EU.

Will these 2 guys get on? Well, one would suspect that they will – though those who know Johnson fear that perhaps their characters could be too similar – both being mavericks in their own way and wishing to claim the headlines.

We suspect that initially they will, and what we are waiting to see is whether to reinforce this relationship, if Johnson will give a role to Nigel Farage – former leader of UKIP and now the leader of the New political party BREXIT – perhaps Farage will become the next Ambassador to Washington, or more likely will attempt to form an electoral pact with the Conservatives to encourage Johnson to call a general election in order to enable the House of Commons to vote in favour of a ‘Hard Brexit’, as the current maths would not enable such a vote to succeed – we shall have to wait and see.

The second major Political event, and perhaps the one most interesting to Americans, is the two Mueller testimonies being held later today, in front of the House Judiciary Committee and the Intelligence Committee.

It appears that Mueller will be accompanied and assisted by one of his trusted assistants – Deputy Special Council – Aaron Zebley – at either one or both of these committees.

Now this event is arguably going to be the political highlight of the year or may prove to be a considerable disappointment. Republicans want Mueller to stick strictly to the Report and to go no further and this was further re-enforced on Monday, when Associate Deputy Attorney General Bradley Weinscheimer wrote a letter to Mueller, responding to a request for guidance regarding “privilege or other legal bars,” emphasizing that his testimony “must remain within the boundaries of your public report because matters within the scope of your investigation were covered by executive privilege.” In other words: no going off book.

Whereas the Democrats will aim to do all that they can for Mueller to go ‘off book’ or at the very least read pertinent parts of the Report so that the American public can hear his words – from the ‘horses mouth’ as it were.

Now whether today’s testimonies will sway the political mood of the country is unlikely, but for President Trump to lose next year’s election, that swaying does not have to be very deep or large. A few percentage points move against the President could be sufficient – but it’s still a fair while before the American electorate will have to make up their minds.

What is more likely, is that today’s testimony, could provide the excuse to enable the Democrats to instigate Impeachment proceedings – but as we stated earlier – it could also prove a disappointment to them.

We have also seen his week the US President claiming that he has been asked by PM Narendra Modi to mediate in the longstanding Kashmir conflict with Pakistan. The Iranian situation which hovers on the brink of military escalation with both the US and UK is highly political, and the Trade Dispute with China – both economic and politic.

All of these factors have a bearing, in differing degrees, on Governmental policies and Economic decision making. If President Trump’s political grip strengthens, we can see further loosening of monetary policies in order to deliver a ‘booming economy’ in time for next years election. If he plays the situation with both China and Iran correctly, this will add to his success, and any deal made with the UK can be heralded as an achievement with one of Americas closest allies.

So to conclude, its not all about supply and demand, economics or manipulation – politics too plays an important part in the pricing of precious metals – and just think what could happen, if Trump or some other future President, instigates policies in favour of some form of gold standard or currency linked to precious metals – truly a pumpers dream – but one that cannot be ruled out 100% in our world of topsy turvy politics.