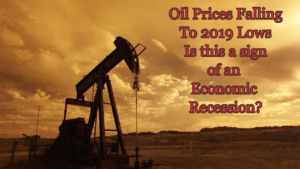 Most of our recent YouTube videos have highlighted a number of factors pointing to a global economic slowdown.

It comes as no surprise to our listeners, that Global institutions such as the World Bank, the IMF and the Bank for International Settlements have all downgraded growth forecasts for this year.

A recent video of our entitled

‘India’s Growth is Falling – What about Gold & Silver Demand?’

shows that even some of the fastest growing economies are slowing down.

Well another indication of this slowdown can be seen in the recent decline of oil prices which fell earlier today to their lowest levels since January. Reasons given include signs that an economic slowdown is starting to affect energy demand and, Russia’s top oil producer has said that it opposes extending joint cuts with OPEC until the end of the year.

This is against a recent backdrop of Oil futures being around 20% below 2019 peaks reached in late April, with May posting the sharpest monthly decline since November, while coal and gas, are also being hit hard by the economic downturn.

Traders admit that they are selling off futures because of their concerns with the China/US trade tariff war.

Since the start of the year, OPEC and Russia have until now with-held supply to keep prices buoyant but that may come to an end when they next meet either in late June or early July.

‘Saudi Energy Minister Khalid al-Falih said on Monday a consensus was emerging among producers to continue working “to sustain market stability” in the second half of the year.

The head of Russian state producer Rosneft, Igor Sechin, said on Tuesday Russia should pump at will and he would seek compensation from the government if cuts were extended.’

Producers are indeed concerned that the economic slowdown will reduce fuel consumption.

Rising US oil output has also dampened down prices and the US is now the world’s largest crude oil producer with 12.3 million barrels per day compared with Russia’s 11.11 million and Saudi Arabia’s 9.65 million.

This indeed bodes well for potential US oil exports onto the world markets which in time will indeed improve their balance of payments – or hopefully at least.

Falling oil prices are potentially yet another sign that global growth is slowing, and although we have seen a rise in Gold and Silver prices these past few days; because of President Trump’s threat to impose tariff charges on Mexico’s imports into the US, Gold standing at $1322 and silver at $14.75 is a slightly worsening position for Silver pro rata, where we expect to see the gold to silver ratio rise above 90:1 very soon.

If the world trade is slowing, this will indeed affect the demand for silver for industrial purposes, so even with the ratio at recent highs, there is still potentially further to go.