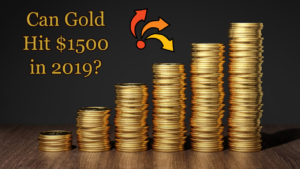 Now we are hearing professional commentators stating that $1500 gold this year is indeed a strong possibility. Now who is saying this?

Well, analysts at Citibank are. According to a recent Reuters Report:

“A U.S. Federal Reserve signal that it may cut rates as soon as next month to combat economic risks – the first reduction since 2008 — has created a bullish tailwind for bullion, said analysts at Citibank….Gold could rise as high as $1,500 by the end of the year, they said.”

Indeed, very positive news. Is there anyone else who is positive? Well yes; Societe Generale analyst Robin Bhar is quoted as saying:

“The stars seem to be aligning for the gold market.”

Back in January of this year, Mad Money’s Jim Cramer stated to Anna Golubva of Kitco:

“A modestly weaker U.S. dollar, as measured on the U.S. Dollar index and slightly lower yields on; the U.S. 10-year treasury notes, the German 10-year, the Italian 10-year and the U.K 10-year were all helping to lift gold Monday………………..Gold loves cheaper money……………This market looks like it will tend to grind higher from here on the back of cheaper money, while yields continue to erode. The trend is your friend, and gold’s trend is clearly higher.”

Also, yesterday UBS strategists lifted their three-month gold target to $1,430 from $1,380 an ounce.

“A few years and several false starts later, we think the macro backdrop has now started moving more convincingly in gold’s favour ……. Though the route for gold is unlikely to be a straight path higher.”

For those interested in technical analysis and a more bullish view; Christopher Vecchio of DailyFX.com states:

“the gold price rally in June may mark the continuation of a major bottoming effort that began in 2017, after breaking the multi-year descending trendline from the 2011 high. The multi-year inverse head and shoulders pattern points to gold price targets between 1685.67 and 1820.99.”

“A lot of momentum buying kicked in after gold took out the 2014 high…… If gold remains above previous highs around $1,360-$1,390, this level would become a powerful technical support, as resistance was now at the August 2013 high of $1,433 and a Fibonacci retracement level around $1,483. The increase in speculative positioning, however, leaves gold vulnerable to a correction if investors reverse their positions.”

So why now we hear you ask? Why has gold suddenly developed a new lease of life after a number of years of decline.

Well we agree in large part to Vecchio’s comment in his article published yesterday where he states:

“There are numerous factors driving the gold price rally, but at the root of them all lies the US-China trade war. The prospect of the world’s two largest economies engaging in a tit-for-tat tariff standoff has already started to cool global growth, and now Federal Reserve policymakers, led by Fed Chair Jerome Powell, are signalling to financial markets that they are ready to cut interest rates if necessary.”

But it’s the next bit we believe he has certainly hit the mark on, and those who have followed our YouTube videos over the past few years will appreciate, that it is this message above all that affects the direction basically of all financial markets – “confidence and uncertainty”.

This is what he says:

“While the gold price rally has been aided by falling US Treasury yields and the weak US Dollar, these are not the root causes of the recent market environment, but merely symptoms of the US-China trade war and its impact on Fed policy. The key theme here is “uncertainty.” Uncertainty in financial markets translates to volatility.

This uncertainty over the Fed’s next move has been bullish for gold prices via gold volatility. While other asset classes don’t like increased volatility (signalling greater uncertainty around cash flows, dividends, coupon payments, etc.), precious metals tend to benefit from periods of higher volatility as uncertainty increases the appeal of gold’s and silver’s safe haven appeal.”

Now this uncertainty and volatility has been further enhanced by the increasing tensions with Iran. We have stated for many weeks, to watch this situation closely.

It was only a few days ago when President Trump called a halt to airstrikes on Iran, which shot down a U.S. military drone. But yesterday he did sign an Executive Order imposing financial sanctions on Iranian leaders. We also have to measure this against a backdrop of Trump, last year, unilaterally withdrawing from the seven-country agreement known as the JCPOA which was containing Iran’s nuclear ambitions and imposed sanctions on Iran’s oil exports.

This, plus additional sanctions, have certainly hurt Iran economically, who now appear to be spoiling for a confrontation; potentially in the hope of jeopardising Trump’s electoral chances next year, and thereby he being replaced, with a possibly more accommodating Democratic President who may re-introduce a similar Agreement.

If this situation escalates, and it could, then we shall see the price of gold rise quite dramatically and indeed easily reaching that $1500 level.

That said, if the conflict fails to escalate and both parties become more accommodative, and President Trump can settle the trade dispute with President Xi at the G20 later this week, then we expect to see a significant gold price reversal – as much of the uncertainty will have been removed.

Unlike many commentators we do not share the view that the US dollar is hell bound for massive devaluation. One has to bear in mind, that its value is relative to other baskets of currencies, and although the FED has hinted at lower rates in the future, so too has the ECB, and so too has China and it won’t be long before the UK will have to as well – though it is managing a very successful devaluation of its currency over its failure to negotiate an appropriate Brexit arrangement without having to reduce rates.

Our concerns are more aimed at global growth slowdown and potential military confrontations, not to forget of course our proverbial ‘black swan’.

Silver, on the other hand, though its has moved positively, is still lagging gold quite considerably, and with gold currently at $1429 and silver at $15.45 we now have a gold to silver ratio of 92.5 – and to think so many pundits thought that a 90:1 ratio was madness – its only madness if you fail to appreciate reality.

It’s obvious really – If global growth is slowing down, then of course silver demand will fall, and that will have a downward impact on prices – and as we have often said, this will only correct itself, when the demand for silver as a monetary metal exceeds the demand for it as an industrial metal, and currently gold is King in that relationship – yes it will eventually change but it may take a while.