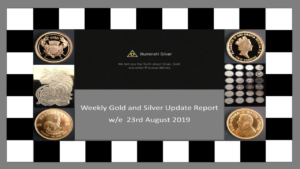 Well last week we stated to expect a little weakening in the gold price at opening – but some volatility during the week while the FOMC minutes were announced on Wednesday and Jerome Powell spoke at the Jackson Hole Symposium on Friday.

Well the gold price did fall and attempted a rally on Wednesday, fell back again and then we saw a significant move on Friday jumping from $1494 and closing at $1527.

So, what actually happened on Friday to cause such a move in the price of gold and a fall of over 600 points in the Dow?

China decided to impose tariffs on US goods ranging from 5-10% on over 5000 goods some $75 bn in value with effect from Sept 1st plus a revival of 25% tariffs on US car imports.

This incurred a reaction from the President stating:

“Our great American companies are hereby ordered to immediately start looking for an alternative to China, including bringing your companies home and making your products in the USA……I will be responding to China’s tariffs this afternoon.”

That afternoon Trump said the US will raise tariffs from 25% to 30% on $250 billion in goods that are already being taxed starting October 1st.

He also threatened to further increase promised tariffs on the remaining $300 billion in Chinese imports from 10% to 15%. Those tariffs are set to begin taking effect September 1st, though most goods will be duty-free until December 15th — a move Trump made to avoid putting a damper on holiday retail sales.

This created turmoil in markets.

Added to that Jerome Powell, though in our view, gave a rather accommodative speech at the Jackson Hole Symposium seemed to have angered the President with the comments:

“there are no recent precedents to guide any policy response to the current situation and monetary policy cannot provide a settled rulebook for international trade.”

Basically, making the case that trade tensions were hitting the global economy, and the Fed didn’t have a “rulebook” to deal with the fallout.

This resulted in an aggressive tweet from the President which stated:

“As usual, the Fed did NOTHING! It is incredible that they can ‘speak’ without knowing or asking what I am doing, which will be announced shortly………We have a very strong dollar and a very weak Fed. I will work ‘brilliantly’ with both, and the U.S. will do great………..My only question is, who is our bigger enemy, Jay Powel or Chairman Xi?”

This undermining of the FED Chair, whom in our view was actually, in coded language, giving the President what he wanted is unprecedented and the markets responded accordingly.

An analysis of the stock market after Jerome’s speech showed that although markets had fallen after China’s announcement, they then began to rise ( as the markets welcome lower interest rates and this is what they felt Powell was promising indirectly) – then came the President’s tweets and announcements, which placed stocks into a tailspin and the consequent rise in gold and silver prices.

From a technical point of view, gold broke through the 10 day moving average resistance level which is now seen as short term support just below $1510 and resistance at August highs of $1535 – some analysts are predicting if this breaks, then there could be a direct route to $1615 the highs last seen back in March 2013  though technically there are some resistance points en-route – not forgetting the psychological resistance level of $1600 which some ironically could see as a challenge worth pushing towards.

So, both short term momentum, and medium-term momentum have turned positive and gold has closed at a 6-year high.

Silver to a large degree followed a similar pattern to gold having dipped initially on Monday and early Tuesday then strongly recovering on Friday. In fact, silver rose on Friday from just below $17 to as high as $17.48 when the turmoil over China and Powell began.

Technically $17.50 offers resistance and $17 support. The uptrend is likely to continue up to $18 short term but should the silver price fall below $16.50 then we may indeed see a fall back into the latter $15 area – though we estimate that is unlikely short term

This week we have a range of economic figures being reported:

Thursday – GDP Revision for Q2 expected at 1.8% and Advance trade in goods and Pending Home Sales for July

Friday – Personal Income, Consumer spending, and Core inflation for August to be reported and the Consumer sentiment index for August.

So, Thursday and particularly Friday are important days.

However, little is more important than what the President is going to do re China and any agreements he makes at this weekend’s G7 meeting.

Yes, World leaders have gathered in France for the G7 summit in the French coastal town of Biarritz and is hosted by French President Emmanuel Macron

The three-day summit is taking place against the backdrop of an escalating trade war between the US and China, Britain’s impending exit from the European Union, growing tensions between the US and Iran over Tehran’s nuclear programme and global concern over fires ravaging the Amazon rainforest in Brazil.

Before the President departed for Biarritz, he already set the scene by lashing out at France for what he said were “unfair” taxes on US tech companies like Google and Amazon and threatened to tax French wine “like they’ve never seen before”.

This will be an opportunity for the leaders of the 7 most powerful countries to discuss, and hopefully agree a range of policies and as far as the UK is concerned a Trade agreement with the US and initial signs are positive.

Trump has backed away from his latest threat in the trade war with China.

Now of course, what everyone is wondering is what is likely to happen when markets open on Monday morning.

Well today it appeared that President Trump was backing off from his threat to escalate his trade war with China, admitting to “second thoughts” – and In comments to reporters ahead of a breakfast with Boris Johnson, the British Prime Minister, the President said that he had “no plans right now” to use the International Emergency Economic Powers Act of 1977 to force businesses to leave China as punishment for the country’s trade practices.

Though he did add: “Well, I have the right to. If I want, I could declare a national emergency.”

Which was softened by the words: “Actually we’re getting along very well with China right now. We’re talking. I think they want to make a deal much more than I do.”

However, we are mindful that there are those within the White House who see this conflict with China as both a politically good move as well as an expeditious one. Senator and Chair of the Senate Committee on the Judiciary, Lindsey Graham, has given the President full support on his China tariffs, pointing out that short term pain was a price worth paying.

China does not however appear to be caving in either. The new round of tariffs they have imposed, specifically targets cars and agricultural products which hurt people who live in red states – directly targeting Republican/ Trump supporters – as it is becoming clear from China that they can last out this President who is declining in the opinion polls.

Their view is that If  the economy fails Trump will lose the 2020 Presidential Election and be replaced by a ‘softer Democrat President’ who may be more accommodating, for unlike the US, President Xi is appointed for life and so does not have to worry about a disgruntled electorate; and with 6% GDP won’t worry too much if its affected by 2 or 3 % for 12 months especially when the US GDP growth has already been downgraded to 2.1%

To add to Trump’s woes:

We must also not forget that Former Director of Communications, Anthony Scaramucci, is also working with other Republicans to remove the President and has indicated that many millions of dollars will be spent against him in ‘swing’ states.

So, what does this mean for the US dollar and gold and silver?

Well the next few days will undoubtedly be quite volatile, and unless the President softens his stance on China, and we are not convinced that he will, we can expect to see the Dow deteriorate further, and gold and silver prices improve further. The dollar will decline a little too, but frankly is still one of the best currencies amongst a ‘bad bunch’.

Exciting times ahead and $1600 gold and $18 within the next 3 -4 weeks is not an unreasonable expectation.