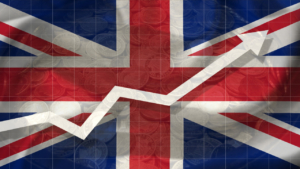 Today is Friday 10th May 2019 and we are discussing the UK growth figures just released this morning and why gold imports are on the rise.

The Office for National Statistics announced this morning that UK Growth was 0.5% in the first quarter of 2019 up from 0.2% in the previous three months.

The manufacturing sector grew at its fastest rate since 1988 and it is claimed that manufacturers’ stockpiling ahead of the original 29th March Brexit deadline helped to boost this growth.

Pharmaceuticals were one of the largest growth sectors expanding some 9.4% in this first quarter – partly due to the public fear that Brexit would cause a considerable inability to obtain certain drug treatments.

This Brexit fear also drove a surge in imports, with the total trade deficit – the gap between what the UK imports and exports – more than doubling in the first quarter from £8.9bn to £18.3bn – a record high.

Two of the items in such demand which contributed to the increase in imports were cars and wait for it, fellow stackers – and gold – non-monetary gold, which rose by £6bn.

(We shall cover this issue of gold imports in a separate video or podcast, but it is certainly worth taking notice of).

Tej Parikh, senior economist at The Institute of Directors, warned the rise in growth may just be “a flash in the pan”.

He goes on to say:

“Some businesses brought activity forward early this year in preparation for leaving the EU, so higher stocks and earlier orders have artificially bumped up the growth numbers……In the second quarter, many firms will be keen to run down their Brexit caches, which will drag on economic growth.”

However, this view is contradicted by Ruth Gregory, senior UK Economist at Capital Economics, who stated that the figures offered some “encouraging signs that underlying growth gained some pace”.

As household consumption growth was “solid” and that business investment grew “for the first time in four quarters.”

Economic growth for the year has recently been reported at 1.8% almost at pre-financial crisis rates, when growth of 2-3% a year was normal.

Now our view on this is pretty straight forward. We shall know in July whether for certain if this economic growth is the result of Pre Brexit hoarding or that the economy is in better shape than many of the naysayers have been predicting.

Either way we have noted that the Governor of the Bank of England – Mark Carney – in recent speeches and articles have alluded to higher interest rates not being ruled out in the not too distant future. Now this may indeed be posturing, however it also fits in with the dynamic that the British economy, in spite of Brexit fears is actually growing at a stronger rate than many believed.

Now that said, we all know to a degree, this is the result of relatively easy credit terms and increasing Government borrowing. Nevertheless, the UK inflation rate, as it is currently measured and reported by the Office for National Statistics stands at 1.8% below the Government’s 2% target which will keep interest rates in check for the time being.

Similar to the situation in the US with decreasing unemployment 3.8% in the UK compared with 3.7% in the US it is not going to be too far into the future that wage pressures will start to occur and the inflation rate likely to rise, especially if western economies remain moderately buoyant and stronger than originally feared.

What is interesting for us in particular, is this slight flight to gold (albeit modest at £6bn) but nevertheless important from a psychological point of view – in that the British people have not forsaken gold entirely despite fears that they had – and this will form part of a separate podcast analysis.

So, from the US and UK points of view and that of Europe, the second quarter of 2019 will indeed provide a good bell weather as to whether our respective economies are heading towards economic growth or decline.