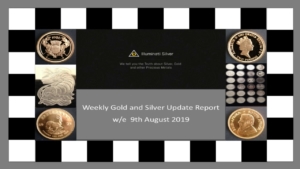 On Monday we began the reporting week with disappointing ISM Non-manufacturing figures for July which came in at 53.7% almost 2% lower against estimates of 55.5% and consumer credit was down compared with the previous month from $18bn to $15

But Monday was exciting for other reasons. Yes whilst it may seem like an age ago, President Trump tweeted that he will be imposing an additional 10% tariffs on virtually all Chinese imports – some $300 billion worth –  with effect from 1st September – resulting in a reversal of dollar strength, raising gold and silver prices and adversely affecting stocks. To add fuel to the fire he then told reporters that he was contemplating raising those tariffs even further to and eye watering 25%.

Well this began the inevitable rise of gold and silver prices almost from the opening.

Then the Chinese devalued the Yuan pushing it below the 7 to 1 ratio it has held against the US Dollar for the first time in 10 years resulting in the US Administration accusing China of being a currency manipulator.

Now we have been saying for weeks and months that China will do whatever it takes to support its economic growth and if that means QE, currency devaluation, – Government spending – its whatever it takes – its leadership is also not truly answerable to its electorate, unlike the US.

Then on Tuesday, President Trump imposed sweeping sanctions on the Venezuelan government, freezing its assets in the US and barring transactions with it, thereby causing more destabilisation. He also called on the FED Chair to reduce interest rates ‘much further and much faster’. Thereby again undermining the US dollar, though ironically helping stock markets which currently would welcome lower rates.

This pushed gold above the $1500 level for the first time in over 6 years and silver above $17 and many pundits expressing that these have much further to rise – essentially because of the uncertainty of the trade dispute with China, and other banks now feeling compelled to reduce their rates, and diminish their currency values, in order to compete with the reducing level of trade that is being experienced right now.

Though we did add that if President Trump keeps poking the bear and deliberately weighing down on trade with additional tariffs and sanctions then an additional $200 could be added to the gold price and if that happened another $4 to silver in 2020.

Having said that, we would like to think that some common sense will prevail that reminds the President, that the purpose of these sanctions and tariffs were to bring people to the negotiating table, not to result in an all-out trade war, where no one benefits; and in fact, could be so harmful to the US, and global economy, would almost certainly result in the election of a New Democrat President in 2020 – which we suspect the Chinese are willing to wait out for.

A further example of the deterioration in the relationship between China and the US can be seen with the US calling China a “thuggish regime” over China’s dispute with Hong Kong.

“I’m Not ready to make a deal” with China, hinting that he may cancel next month’s trade talks. He added that he wouldn’t do business with Chinese technology firm Huawei while repeating many of his criticisms of China reneging on its commitments.

So the question we have to ask ourselves and attempt to assess is how much is this just political rhetoric and how much can actually lead into a long lasting trade war which if it is too elongated, will ultimately result in a currency war, with not only interest rates falling further but currencies consistently devaluing in order to attempt to gain some form of competitive economic advantage.

Politics aside, which frankly is difficult to ignore at the moment, let’s take a look at technical trader’s views of where we are with both gold and silver.

Well Friday saw gold oscillate around the $1500 level closing just below it. $1450 offers a high level of support which is where the 50-day EMA is moving towards. The short-term range is between $1412 and $1522 and that we should expect further weakness on Monday and perhaps up until the substantial amount of economic data is published on Thursday. So the general consensus is that one should see these pullbacks as positive opportunities for purchasing as many technical traders believe that future interest rate cuts will further support gold.

Silver appears to meet significant resistance at the $17 level which it closed marginally below on Friday. Support seems to be quite strong at the $16 level and if silver can manage to push above $17 and hold then it would quickly go to $17.50 and potentially $18. Like gold, the 50 day EMA is heading towards the lower figure and in silver’s case is $16, – close to this level many interested buyers are likely to re-enter the market.

So technically speaking, we are to expect some weakness in both gold and silver early next week – but we also have to be mindful that, at the moment, the Presidents tweets are far more powerful than technical considerations.

Let’s take a brief look at what economic data will be announced this coming week:

So, an interesting week, especially Tuesday and Thursday, which, depending on how the figures pan out, could be quite bullish for gold and silver on Thursday.

At this stage we wish to draw your attention to some of the videos we have recently produced and if you haven’t had the opportunity to listen to them, we strongly suggest that you do as they cover a range of aspects which are today having a major influence on gold and silver prices. We have listed them in the description box below.

We have stated for months, that gold in particular, was offering an excellent opportunity for those dealing in sterling, as the Brexit fiasco was without doubt going to have a major deteriorating effect of the value of the pound.

Yes, we were more wary of the dollar value, though the FED’s reversal in policy at the beginning of the year was certainly going to underpin prices somewhat.

Trump’s trade war with China, which looked as if it was going to be resolved, would have pushed gold prices back down again – but China has not responded in the way Trump had hoped they would, and this factor alone – is sufficient to keep prices pretty well supported not forgetting concerns over Iran, North Korea and potential impeachment proceedings.

Finally, for Inner sanctum members, we are putting up a new section called Investment where we produce articles and videos on various areas of investment interest. Although we cannot give advice, we can certainly bring to you the thoughts and considerations of leaders in these fields and perhaps give a steer of what our thoughts are on these matters.

We also produced our monthly webinar last night which can be found on both the website and our new discord channel where 4 of us – I.S. Controversially Greg, Journo Marcus and Bowman discussed subjects such as:

The suspicious death of Epstein

Gold and Silver and the World economy

So, if you are an inner sanctum paying member, please go to our website or discord channel and listen to our 2-hour long webinar – we think it’s quite interesting and some opposing strong opinions were also revealed. If you are not a paying subscriber to our inner sanctum you can join us by subscribing via our website and the first link in the description below will take you there.