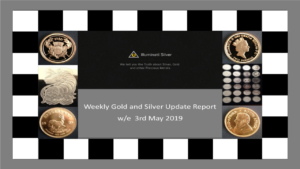 Last week witnessed a continuing decline in gold in US dollar terms right from the start with minor rally attempts midweek and then a fall late Wednesday into Thursday with a moderate recovery on Friday; ending the week down $10 but up $10 from its lowest point on Thursday.

Now before we go into any analysis as to why this occurred, we must be mindful that we are only talking about a spread of some $20 between its weekly high and weekly low which represents approximately 1.5% – so this must be taken into account and given the correct perspective. Unless you are a high-volume day trader such moves are really of limited relevance though we do like to assess trends and with lower highs and lower lows compared with the previous week, it may suggest something.

There were some interesting reports out last week which affected gold and silver prices and of course the dollar value.

On Monday we saw core inflation at 0% for March compared with an estimated 0.1% and consumer spending came in at 0.9% for March against an expected 0.8%. Consumer Confidence Index for April was higher than the median forecast and Pending Home Sales came in at 3.8% compared with -1% previously.

On Wednesday the FOMC announced that it was holding interest rates at their current level of 2.25% – 2.5% and FED Chair Jerome Powell gave a press conference which actually suggested to markets that although interest rates were not likely to go up, the prospects of higher rates are not off the table bearing in mind how well the economy is reported as doing – at least therefore giving an underlying guide not to expect lower rates for some time to come.

This was further supported with higher productivity figures announced on Thursday for Q1 showing growth of 3.6% compared with an expected 2.9% and as paltry 1.3% in Q4 of 2018. Factory orders for March were also up at 1.9%.

Once again Friday saw a higher than expected Non-Farm Payroll Jobs Report showing 263,000 new jobs were created in April compared with an expected 213,000. The unemployment rate fell from 3.8% to 3.6% while average hourly earnings remained unchanged at 0.2%

So economic figures once again were indeed positive though the President took the shine off such good news by tweeting about his private phone conversation with President Putin rather than revel in what to many is a good news story.

The reason gold rose on Friday primarily was the rise in the Euro compared with the US dollar as European inflation was higher than expected at 1.7% and the US Jobs Report being so positive – though we suspect this may actually turn into negative sentiment for gold as it is likely to further strengthen the US Dollar.

For those who listened to our Interview with Erik Townsend – Hedge Fund Manager/Owner you will notice that he believes the US dollar is likely to move much higher well above 100 in the index and this will create a very strong headwind against gold. We tend to agree with him and also expect lower prices ahead though we are more cautious in envisaging gold falling more towards $1100 than below $1,000. We have placed the interview links in the description below this podcast.

Silver prices showed a more marked decline int hat there was very little recovery until Friday and the spread between highs and lows was some 52 cents or close to 3.5% which is a wider percentage than gold at 1.5%.

We are finding it very difficult to be positive about silver at the moment in terms of price appreciation. If global economies are growing faster than originally thought this will prove positive for industrial demand, and yet when we look at volume purchases, they are not that significant – certainly not last week save for Friday and again we suspect that silver prices may yet again turn downwards very soon if not next week.

From a technical point of view silver tested new recent lows and although there was a rebound up to the $15 level analysts agree this now represents quite a significant ceiling or resistance level. So, although there may be a slight positive move early next week, we still foresee a further breaking down in the silver price.

So, we are not expecting US economic data announcements to particularly affect prices next week.

In conclusion, while the US dollar continues its strength and the Economy maintains reasonable growth and President Trump can pull a few rabbits out of the hat such as Infrastructure spending agreements and a deal with China we can expect stock markets continue to rise and the dollar to strengthen and commodity prices, especially gold and silver, to fall.

However, if he fails to achieve this, and if the announcement yesterday that North Korea has released another testing missile – resulting in some increasing of tensions both politically and militarily – then of course gold, and consequently silver, prices will benefit.

Geopolitical concerns apart, we are still of the opinion that lower prices are ahead for gold and silver in US dollar terms and also in sterling terms because of Brexit being delayed until October. Of course, other countries may experience something different as their currencies compare with a strengthening US dollar.