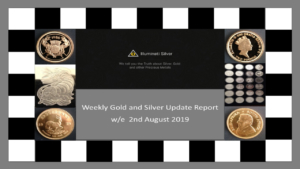 Well what an interesting week last week proved to be.

We had gold initially rising, then essentially collapsing after the FED announcement on interest rates and then recovering and reaching new recent highs almost within hours of the fall – so what actually happened?

Well much of it is explained in the videos we produced last week which includes titles such as:

If you haven’t already listened to them, we have provided links in the description box below – we seriously suggest you do so as a number of experts have come out since their publications offering similar analysis and broadly agreeing with our statements.

In short, whilst the FED reduced rates by 0.25% this was already baked in and markets were disappointed in that the FED adopted a more hawkish stance about future cuts than expected, thereby strengthening the dollar, adversely affecting stocks markets slightly and causing gold and silver prices to fall.

However, within hours President Trump then tweets that he is imposing an additional 10% tariffs on virtually all Chinese imports – some $300 billion worth with effect from 1st September – thereby reversing the dollar strength, raising gold and silver prices and adversely affecting stocks further.

So, a most interesting roller coaster ride, supporting our view, often repeated, that politics has as much to do with precious metal price action as most of the other criteria which affects them and the reason, we cover these issues within this channel.

From a technical point of view, and to be fair, also from a psychological point of view, gold is hovering and may eventually surpass that all important $1450 level and will attempt to gravitate towards $1500. If that level is then broken, then we could indeed see gold move even higher. However, we suspect that there is likely to be some consolidation first.

On the downside $1400 offer considerable support though it was nearly breached last week, and if traders push it down to that level it could fall by some $50 to $1350. However, President Trump is so desperate to get the FED to cut interest rates further as he wants stock markets to rise to a zenith come the next election, he may attempt a number of tariff initiatives and controversies in order to get the FED to reduce rates as a counter balance to the disruption. This will certainly prove positive for gold, but is, in our opinion a very risky strategy – should it go wrong.

The result of his tariff announcement of 10% increase and his comments to reporters afterwards that he could very easily increase this to 25% in short order, resulted in the yield on the benchmark 10-year Treasury note plummeting to its lowest level since 2016 in response to the news. We need not remind you that low yields tend to make gold a more attractive asset.

Friday was also an important day for economic data including the all-important Non-Farm payroll Report which showed 164,000 new jobs were created in July against an expectation of 163,000 with the unemployment rate just blipping up slightly to 3.7% just 0.1% higher than expectations but equivalent to June. Average hourly earnings were also the same as June’s at 0.3% but higher than expectations of 0.2% and both consumer sentiment and factory orders were within a fraction of expectations.

All of these figures had the potential to affect markets one way or the other but as they were so close to expectations, to some degree their impact was quite benign.

Silver did not fare so well as gold with the gold to silver ratio rising by over 2 points rest just slightly short of 89:1.

Now of course we could be wrong, but while the trade disputes are in effect, and the global recession continues, we have difficulty in seeing the GSR falling much below 85:1 and possibly even rising back into the 90’s. Whilst the pumpers will have you believe the correction is imminent and guaranteed, we would argue not so while these disputes and economic uncertainty continues.

If Industrial demand for silver was not such an important  percentage of its overall demand, perhaps our position would be different, but as it is, while the world is in recession physical demand for industrial purposes is likely to fall, and one can then only hope that its demand as a monetary metal becomes more prominent and makes up that shortfall – which is by no means as certain as the pumpers would have you believe. One day the ratio will correct somewhat, we are just not convinced its going to be that soon.

What was notable last week was that silver fell below that important $16 support level, though it did quickly recover – though one has to ask how much lower than $16 it would currently be resting at had it not been for Trump’s tweet re China tariffs.

So we would not be at all surprised to see silver vacillate over the coming weeks between $15.50 – $17 with the latter really being at the higher end of our expectations over the Summer months – although we have forecast that we may see $17.50 at some stage before the year is out, but as to whether it will hold at that level is anyone’s guess at this stage.

Let’s take a brief look at what economic data will be announced this coming week:

So, nothing really significant to affect gold and silver prices though perhaps Monday and Friday will be the most interesting days.

We would now like to add a little here about gold and silver prices in sterling, and which to some extent applies to other countries in a similar position outside of the US.

This past 2 weeks we have produced a number of youtube videos highlighting the fact that we expected gold prices to rise to all time highs in sterling terms – and this it has done. Now we appreciate that those living in the US will jot be anywhere near as interested in this as our Anglo cousins are but it is important that you are at least aware of this.

As far as the UK is concerned the BREXIT factor has a huge impact, and as far as Europe is concerned it also has quite a significant impact. We have seen sterling’s value fall quite considerably these past 2 years and particularly more recently as the prospect of a ‘Hard Brexit’ becomes increasingly likely.

The result of this currency weakening, and particularly weakening against the US dollar, is that gold and silver prices rise. Not necessarily because Brits are rushing to the bullion dealers buying it, but because its global price is set in dollars, and so it’s the interrelationship between one currency and the US dollar which is important. Now of course if the dollar price of gold and silver also rises at the same time, then the bullish price action is accentuated.

The two videos we draw your attention to are:

and we again provide links in the description below.

These are particularly important of course to those who purchase gold and silver in sterling terms as at some stage this sterling weakness will eventually reverse. Not for a few months in our opinion, but traders and some gold holders may wish to cash in at some point and so its important to keep abreast of these developments. Its also important for others too, as these and other videos we produce provide reasonably accurate diagnosis and predictive contexts and one day your currency may be facing similar circumstances.

We often smile when perhaps we may only receive 1,000 or 2,000 views, while others who just repeat talking heads with ‘gold and silver going to the moon’ and bringing in their followers with click bait receiving up to 100,000 views. We smile because often people listen to just what they want to hear and not what actually is happening. This is an hugely increasing problem with social media and media in general, as it means that ‘fake news’ can be sincerely believed by those who have neither the time, or in some cases the skills, to differentiate. You see this most clearly with the naïve followers of some politicians – fake news and bubble thinking is doing great damage to our society as a whole.

We also smile because we are now receiving journalist requests from serious newspapers and media blogs asking our opinion on future developments.

So as you listen to our videos for free, or as a paying member in the Inner Sanctum, please at least be mindful of the fact, that some journalists and bloggers, are paying literally scores and often hundreds of dollars or pounds for broadly the same information – except that they put it out under their own name or banner.

We mention this only so that sometimes when one gets information for free or for a small fee, they often take it for granted, or even occasionally dismiss it. We are not some kid in a bedroom reading Alex Jones or some Pumper and just regurgitating the same old ‘crap’ (sorry for the language) in order to attract viewers via click bait headlines and techniques.

This is a channel that takes you seriously and attempts to put in relatively simple terms what is actually occurring in a complex financial and political world; and for those 1,000 – 2,000 who listen to us regularly, we both thank and congratulate you for at least having the discernment to do so.

So next week we suspect some consolidation and again simply warn, the issues to look out for are China, Iran, Trump picking new battles on trade, North Korea and for the Brits Brexit – though most parliaments are now in recess and so the media will often be scratching around for news.

There is also the possibility, and much depends on economic earnings from companies that stocks may take a slight hit or a correction downwards as they were not too happy about the FED’s hawkish stance and even less happy about trump’s tweets on tariffs, and as any deal with china is unlikely before September we may indeed some drift downwards in equities until more certainty occurs. This could indeed be positive for gold and silver and perhaps may correct any consolidation of precious metal prices to the upside.

Finally, to all Inner Sanctum members, we are sending an email later today with a link to our discord channel plus 2 videos you can watch highlighting how it works.

Please join Discord as we shall shortly be offering a number of monetary incentives to members who regularly participate.