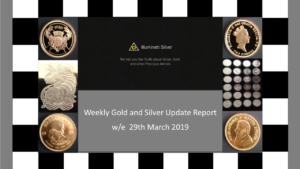 Our conclusion in last week’s report stated: “we do not see anything particularly exciting on the economic front for gold and silver prices next week, save that they will continue to move more or less range bound as mentioned in previous weeks.”

Well the gold price opened a few dollars stronger last week, maintained its level until Wednesday and then started its decline closing just $5 above its weekly low. The fall below $1300 is psychologically significant but from a technical point of view the floor of $1287 is of particular note as if this is breached then the downtrend is confirmed. Equally on the upside if $1330 is breached.

There is little doubt that the dollar strength has impacted gold prices together with an appetite for slightly riskier investments including stocks. Though as we have said for the past few weeks, we are operating within a relatively tight band.

We have been the object of quite some criticism by certain pumper trolls and guru acolytes who said we were wrong about the dollar when we stated we expected the index to rise above 95 where it stood a few weeks ago and to expect figures above 97 heading very shortly toward 98 as they were forecasting a fall to and below 90. Well as we stated last week, the US dollar is the best of a bad bunch and we really do not foresee any dramatic fall in its relative value against other currencies for some time yet.

On the silver front, once again a similar pattern to gold last week. The $15 floor basically held with just a brief infringement and this is important. Our analysis for some time stated that we saw a broad trading range between $15 – 416 and a tight range between $15 – $15.50. Now of course if dollar strength continues the $15 level will be breached and we do expect this to happen in the not too distant future as we simply cannot see where the demand for more silver is going to come from in a world economy that is turning down.

Its only hope near term is that people utilise it as a monetary metal, but let’s be really blunt here, if markets are not expecting any further rises in interest rates and in fact may predict the next move being down, we can expect stock markets to rise further partially at the expense of gold and silver.

An interesting week for data and especially Friday and we shall see whether February Jobs figures which were surprisingly low will be rerated and whether there is some improvement.

So how do we see this coming week. Well one thing is for certain. We shall not see Silver at $100 and gold at $5,000 as our friend David Morgan predicted on Palisade Radio back in September 2017 for 2018 or 2019. If anything, we see a slight bias downwards but the figures this week are quite meaningful and will have an impact. Of course, all of the debate around Basel III has not seen the sudden upsurge in gold prices many predicted, and we shall see if that follows through from 1st April.

As always, our view is that long term gold and silver are excellent purchases and one should maintain a certain level of between 10% – 20% (depending on your aggressive or passive investment tolerance) in your portfolio which means that when prices dip and you are below these figures it presents a great opportunity. If you are above these figures well of course the decision is yours but we still believe that more favourable prices are ahead in US dollar terms.

Meanwhile, we hope you have a most prosperous week ahead and for Inner Sanctum Bronze and Silver members we are uploading new eBooks and courses later today and hopefully this evening or latest tomorrow morning a video in the Inner Sanctum as a result of our bankers meeting in Rome – watch out for that one. Because of our Rome visit, we did not manage to upload all of the Inner Sanctum videos we had planned to but by Tuesday will have caught up completely.

For those interested in Brexit we have some crucial weeks ahead so do stay tuned to Dr Richard North’s blog.