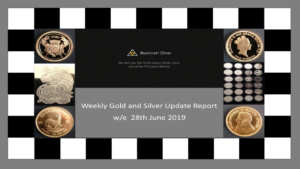 Gold prices initially rallied at the start of last week but peaked on Tuesday and gradually began to fall back again with one or two attempts of a resurrection. Earlier in the week, Fed officials made comments that encouraged traders to reduce their expectations of a 50-basis point rate cut. This drove gold prices lower.  We have stated on many occasions that whilst the markets are expecting a rate cut in July and a further one later in the year,, we are not that confident and do not be surprised if there is a rate cut then it is delayed until September or even December. Of course, any deterioration in economic figures will force a reduction but the status quo or an improvement will delay such a move.

From a technical point of view, support is seen near the 10-day moving average at 1,390 and resistance is seen near the June highs at 1,433. Medium term momentum remains positive as the MACD with an upward sloping trajectory points to higher prices. However, the current reading on the RSI is 77, well above the overbought trigger level of 70 which could foreshadow a correction. The consensus is that a shooting star has formed and pullbacks below $1400 is likely.

With the G20 meeting having basically gone well for President Trump and the agreement with President Xi of China to pause hostilities on trade and resume trade talks plus the US allowing companies to deal with the tech giant Huawei, will in our opinion prove positive for stock markets and be somewhat negative for gold short term.

Silver ended in negative territory last week and is truly struggling to gain positive momentum after its initial opening rise. The $15 level is key, and we must all be mindful of this. At the moment silver is trading just above the 50-week EMA which, technically speaking is a good sign. However, should it fall below the very strong support level of $15, then we could see a fall back almost immediately to around $14.50

Silver is still going to move in trend with gold but not as strongly to the upside until a clearer and more positive picture is seen in terms of trade. The agreement for the US not to increase the tariffs on Chinese goods as agreed at the G20 between President Trump and Xi may help it a little, but we have to wait and see as to the extent as we suspect that the fear factor reducing may cause both gold and silver prices to fall as monies leave this market and re-enter equities once again.

So, what’s on the economic calendar next week:

Wednesday – Trade Deficit Figures and Factory Orders for May plus Markit Services PMI and ISM Non Manufacturing Index for June.

Thursday – Nothing scheduled as its Independence Day

Based on last week’s figures, New Home Sales were down some 43,000 against expectations; durable goods orders were down for May by 1.3% against an expectation of – 1% and Consumer spending rose by 0.4% compared with an expected 0.5%. Equally though both the GDP revision remained as expected at 3.1% for Q1 and interestingly personal Income rose from an expected 0.3% to 0.5% in May, the same level of growth as experienced in April.

So, in conclusion, a positive G20 meeting for President trump plus an agreement not to increase the tariffs on China for the time being plus the President meeting with Kim Jong Un in North Korea will all begin to reduce the markets fear factor and improve equities. This will, at least short term in our view, prove negative for precious metal prices as the ‘fear factor’ will have been reduced.

Now we admit this may only be a temporary stall but nevertheless, it could develop into a more enduring one if progress is made on the China US relationship and we can see the issues with Iran calm down somewhat. Iran, we see as the major stimulus to push precious metal prices higher short term, and without that stimulus we shall be back to $1400 gold and $14 silver.

Finally, to all Inner Sanctum members we are publishing two interviews next week which we have conducted, plus we have our webinar next Saturday and a boat load of new products available for free will be uploaded to the site on Tuesday.

All that remains is to wish you all a most prosperous week ahead and a happy Independence Day to our American colleagues on Thursday.