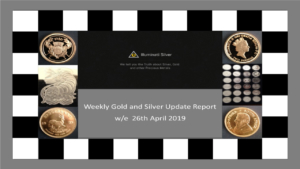 The Gold to Silver Ratio remained unchanged at 85.2:1

The dollar index stands at 98 that’s up 0.63 on the week reversing the previous week’s fall.

Gold markets fell during the early part of last week and then began a gradual rise on Wednesday and gained reasonable ground on Friday, closing up $10 on the week. Technical analysts are cautious predicting once again that the price could move in either direction and most suggest caution. If we see a rise above $1292 then that would be bullish, however the gains made on Friday could easily be given back on Monday. Although prices rose last week, we noticed that lasts week’s low in both gold and silver were lower than the previous week’s low – something to take particular notice of.

Silver followed gold pattern, dropping dramatically on Tuesday but again recovered later in the week. Technical analysis suggest that a falling wedge has been created and any break upwards of the wedge will prove positive. Closing above $15 indeed renewed some traders confidence however a podcast we shall be releasing tomorrow will paint a very interesting picture with regards to one professional’s view as to where these markets are heading in the months ahead.

So, we have an exhaustive week of reports which should generate quite a lot of interest in stocks as well as commodities and we shall see which of these investment choices benefits the most. Of course, it’s all about the dollar and that is again likely to have the greater influence on precious metal prices dependent on the week’s reports.

Interestingly last Friday GDP figures for Q1 were reported at 3.2% compared with an expectation of 2.3% and if these positive figures continue this coming week, we may indeed see commodities under pressure as the dollar is likely to gain further, though to be fair, it is already standing at a lofty 98.

Now tomorrow we have a treat for our viewers and subscribers in that we shall be interviewing Mr Erik Townsend a former teenage computer protégé and now a retired entrepreneur turned hedge fund manager and my word has he got some revelatory comments on the price of gold and silver.

You really must tune in for that interview – which will then be continued further as we shall be discussing additional issues within the Inner sanctum so a treat for all of our non-members and members alike. But be warned, do not listen if you fear hearing things you do not wish to hear – that is all we can say right now.