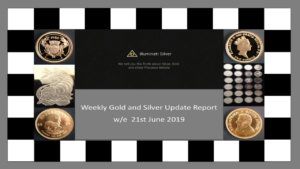 We ended last week’s video with the words:

“So next week it’s all about the FED, so expect some oscillation on gold and silver prices. Wednesday will be crucial, but we are not optimistic there will be an interest rate rise this month. Jerome Powell may leave his options open for July, though frankly, we believe any rise is more likely to occur in September, or even later in the year.”

And was it ever thus.

Gold oscillated a little at the start of the week, with a slight upward bias, but once Jerome Powell had spoken it was on a tear upwards peaking at $1410 early Friday morning (UK time) and closed just below the psychologically important $1400 level, which we predicted would be reached in the YouTube video we published on Thursday entitled:

Link provided in the description below. We seriously recommend you listen to that if you haven’t already done so as we lay out a number of potentialities vis-à-vis interest rates.

So where are we from a technical analysis point of view?

Well upside momentum is strong with resistance levels plotted between $1417 and $1457 which represent main tops on the daily chart.

Tomorrow will be an important day as any break above $1415 will be a signal that prices are going higher but if this does not occur then we could indeed see a fall back to the mid-$1300 range.

However, geopolitics are playing in favour of higher gold prices especially the dispute with Iran and the aborted military attach announced on Friday added fuel to the fire when it was made public.

So from a technical point of view we should see lower prices next week, but geopolitics may soften that impact or even drive prices higher – if however the Iran situation calms down and we see some resolution at the G20 later in the week on 28th and 29th then we are confident that $1350 gold will be the new resting place if not even lower. Of course, if these situations worsen, then $1450 gold is certainly not out of bounds.

Silver prices moved with a similar momentum and pattern to gold breaking through the significant $15 level and surpassing, albeit briefly $15.50 falling back again late on Friday to a comfortable mid $15.30’s.

$15.50 will offer quite a bit of resistance but $16 is where we see a real hurdle to overcome. We still have to bear in mind that for the moment, with the FED indicating lower rates ahead, the China trade tariff war in a serious situation and potential military strikes against Iran on the cards, there is much to promote precious metal prices, and yet, silver in particular, is performing ok but no-where near as well as many thought it would, with the GSR ratio now having reached the level we said it would a couple of weeks back where others thought it was either impossible or madness – yes it has reached 91:1.

Providing no war breaks out with Iran, we think the markets have over-egged the FED’s interest rate policy. We are not convinced rates are going to fall as quickly, or as often, as the markets are factoring in, and this, if we are right, will prove disappointing to the markets, and we could indeed see a strengthening of the US dollar. For the moment everyone sees the opposite occurring, but there is always the danger with these things that markets overstretch.

So, what’s on the economic calendar next week:

Wednesday – Durable Goods Orders for May

Friday – Personal Income, Consumer Spending and Core Inflation figures all for May

We conclude this week’s updates with a comment in reaction to some of the subscriber comments we have received on recent videos. The purpose of our update is to attempt to guide you, where we believe markets are heading the following week, and months ahead. We do this against the backdrop of believing that precious metals, and especially gold and silver, have a lustrous future – which will deliver at least monetary stability, and potentially, capital gains, if one can afford to hold for the long term.

The weekly assessments also serve the purpose for you to be aware of the factors which we believe will affect those prices – very often being political, economic, technical and sometimes industry specific.

We do not try and hedge our bets as some have accused us of, but actually point out that this is not just a one dynamic pricing mechanism. If it were solely based on physical supply and demand, we could forecast price movements within half a percent each week without fail.

When President Trump sends out a tweet (even though he doesn’t necessarily enact a policy) that can influence market prices. When one country, due to recessionary pressures, lowers their interest rate, that reverberates around the world and affects market prices. If a new silver discovery in some far away country is announced, that can affect market prices, and if Comex traders wake up one morning, with a bad headache from parting the night before, believe it or not, that too, can affect market prices as they trade too aggressively or passively, as a result of their delinquent state.

So, we often point out the alternative scenarios and give our best estimate of which ones we believe will dominate, and so far, over the years, our track record has been much more accurate than those basing their analyses on technicals or fundamentals alone.

But in the end the decision to buy or sell is yours and every subscriber’s financial situation is different. So, we hope and trust you bear this in mind when you listen to our podcasts or YouTube videos.

All that said, we wish you all a most prosperous week ahead and if you haven’t already done so, please sign up to our discord comms channel where there are over 50 subscribers sharing thoughts and ideas each day.