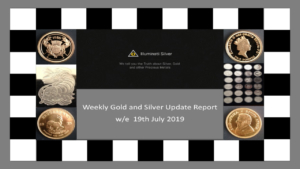 Gold prices opened initially weaker, bottomed to $1400 on Wednesday and then rallied twice, peaking on Friday morning and falling back a little in the afternoon – clearly the result of profit taking, but after it had reached a 6 year high. Part of the rise was on the back of further dovish comments from FED officials including John Williams and Richard Clarida, the latter commenting on the increasing tensions with Iran and recent naval incidents including the U.S. Navy announcing it had shot down an Iranian drone in the Strait of Hormuz – something we have been warning members about for some time.

Also, the dollar index strengthened on the back of a considerable fall in the Euro as investors now believe that it is highly likely that the ECB will cut rates on 25th July.

From a technical point of view, the lower closing price of $1425 suggests a reversal top leading towards downward momentum. The reality however is that we shall have to wait and see whether that reduction continues into Monday and if it does then gold will struggle to remain above $1400 and if it doesn’t and we see renewed buying then it should break through that resistive $1450 level which may become the floor.

Tensions were further heightened when a second British-owned Liberian-flagged tanker, the MV Mesdar, was also boarded by armed guards but fortunately was released on Friday.

“Yesterday’s action in Gulf shows worrying signs Iran may be choosing a dangerous path of illegal and destabilising behaviour after Gibraltar’s legal detention of oil bound for Syria.”

that the UK “must cease being an accessory to Economic Terrorism of the US”.

So, we have to wait and see how this plays out but increasing tensions will only prove positive for gold as a go to ‘safe haven’ investment which is why it will be difficult to assess Monday’s opening price, as technically it should fall, but geopolitics may indeed provoke the opposite reaction.

However, with traders expecting a 0.25% FED cut on 31st July, and some calling for and forecasting a 0.5% cut, this will serve to underpin gold prices – so if anything, we see some price volatility until the Iran and FED decision outcomes are known.

Having covered gold, silver was the real story of last week and yesterday we produced a video entitled

Why did SILVER prices RISE this week?

If you haven’t seen it then we do recommend that you do, but to recap, and perhaps to add some further points, the main reasons silver rose last week are as follows:

Apart from a very small dip on Monday morning, silver prices continued to rise all week, peaking on Friday and falling back a little in the afternoon following profit taking.

What we found interesting, speaking to a number of dealers in the UK (3 major ones in fact), each of them were reporting an increase in sales of silver to them from customers. Now we have to admit we were expecting the opposite i.e. increases in physical buying by customers, as now at last, silver prices were beginning to rise – but perhaps – as far as the UK is concerned – there must be some loose hands in the silver space waiting to extricate holdings.

We can certainly see in Asia increasing physical purchases of silver – mainly at the cost of gold, and we suspect, though we haven’t yet been able to confirm this, similarly in the US.

We are certainly aware of increasing gold purchases by central banks and of course many commentators believe that where gold silver must go to but further. Added to this of course is the view, held by the likes of analyst Ted Butler is that JP Morgan Chase may be trying to corner the silver market in a similar fashion as the Hunt brothers in 1980. Data from the CME Group shows the investment bank by far holds the largest position in silver, with a total of 153.7 million troy ounces. Butler alleges that JPMorgan has been stockpiling physical silver while undertaking COMEX short selling – to keep the prices down. So, if true, the announcement of a whale or four going long silver last week may indeed be the turning point thereby pushing silver to uncalled for heights, enabling JPMorgan to liquidate its physical at vast profits.

Interesting conspiracy all of this sounds, and yes a JPMorgan trader has pleaded guilty to metal price manipulation, we suspect this is just a paper play acknowledging that the GSR has got out of kilter and that this has to be corrected – more so with silver rising in price rather than gold falling – bearing in mind the current global economic environment.

That said, one has to still bear in mind that any silver rise will, while the world is economic recession, be tempered by reducing industrial demand with some 56% or 57% of all physical silver demand is currently used for Industrial purposes.

According to INTL FCStone analyst Rhona O’Connell, weakening global economic growth is undermining the outlook for demand and dragging on prices. Adding to that, huge stockpiles could mean the metal is unlikely to join gold in its all-time highs.

So, what economic data influences can we expect to see arise next week?

So, Wednesday and Friday are probably the most important days for economic statistics and as we stated last week, the greater influence will be the market’s assessment as to whether rates are likely to be reduced by 0.25% or 0.5% on the 31st – though our view remains that the former is more likely.

A couple of months ago, we were asked by a member what level we believed silver could reach in 2019 both to the upside and the downside. The answer we gave that member then was a low of $14 with a possible flash low of $13.50 and a high of $17.50 with silver resting closer to the $15 mark. Now the last time silver hit $17.50 was in September 2017 and that year peaked just above $18.30. Frankly we do not envisage this year to be much different, unless the geopolitical black swans we warn of come into focus.

Yes, we are now all facing an environment of lower interest rates which should prove positive for gold and silver, but we have to bear in mind, that the reason for those lower rates, will be falling global demand, and therefore lower silver usage for industrial purposes.

We also have to remember that stockmarkets love low interest rate environments (except the banking sector of course), and this is an alternative location for investors to place their capital.

So, whilst we may very well see a short catch up by silver and frankly possibly $17 silver next week or by the end of the month and perhaps a $17.50 peak, we can also envisage pull backs and silver settling back down again between $15 – $16.

That said, if we completely misjudge the FED and they lower rates dramatically (which we doubt) and either China refuses any deal with the US and the Iran situation worsens further, then certainly this will be a short-term boost for both gold and silver and could push prices up to $1600 gold and $20 silver (it won’t go above $20 as we all know according to Harvey Organ, it is at that point all of the banks will collapse – see our video in the description below.

Sorry couldn’t resist that one.

In view of the potential worsening Iran situation and the FED’s interest rate announcement due in just 11 days’ time and the ECB is just 5 days’ time, it would be a little irresponsible of us to suggest that gold and silver prices will either definitely go up or down next week.

Often, we can predict it with some degree of accuracy, however there are too many variables at play which could affect it in either direction. Our inclination though is still some firming of prices until both rate decisions are out of the way – but the one thing we can say with a degree of confidence and will happily be called out if wrong – we are almost certainly not going to see $2000 gold and most certainly not $200 silver this year as Keith Neumeyer President & CEO of First Majestic Silver Corp, is quoted as forecasting on what we regard as one of YouTubes major pumping channels SilverDoctors just 5 days ago.

Finally, to all Inner Sanctum members, our branded merchandise is now on the website at illuminatisilver.com and you receive discounts if you are a bronze or silver member. Tomorrow we shall be publishing a premium video in the inner sanctum – our 3rd Modern Monetary Theory video especially as very shortly the world is expected to adopt its principles for the foreseeable future.

Also, if you haven’t already done so please sign up to our discord channel which is primarily hosted by Bowman and regularly contributed to by Controversially Greg and from this week onwards myself so that matters can be debated and discussed as they arise.

All that remains is to wish each of you a most prosperous week ahead.

The Nonsense of Harvey Organ and Silver Doctor’s Encouragement