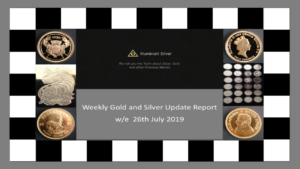 We ended last week’s commentary concerning our forecast for gold and silver as follows:

“Our inclination though is still some firming of prices until both rate decisions are out of the way” and with the exception of a slight dip in the gold price in US dollar terms, we were pretty much on forecast; though we did admit that there were so many variables at play, it was a difficult forecast to make – however the pumpers had no doubts in predicting enormously higher prices, as the new Bull Run was not only in place but is about to ‘go to the moon’- as they claim that the dollar is on the verge of collapse.

Interesting that the dollar has just happened to hit a new time high for the year, on the back of stronger than expected GDP data announced on Friday – a rise of 2.1% against estimates of 2% (but we have to admit down from the first quarter’s 3.1% and is the weakest increase since President Trump took office.

Despite this fall in growth it still remains quite positive, especially when compared with that of many other Countries, especially Europe, and it indicates that a US recession (as its technically calculated) is still some way off, and this certainly strengthened the dollar to its current level.

It also is a mixed blessing for stock markets, especially as they were hoping the FED would be cutting rates on 31st July by 0.5%, whereas in reality, its likely to be 0.25%, and we have stated all along, if we were running the FED, we would not be cutting rates at all.

Well as a result, gold vacillated last week, and weakened on Friday but in fairness within quite a tight range of just $21 or 1.5% for the week.

From a technical analysis point of view whilst the main trend is up, the momentum is lower, and we may very well see gold operate, short term, within a range of between $1396 and $1467.

But as mentioned earlier its all eyes on the FED.

To some extent the dollar is also buoyed by the fact that although the ECB did not cut rates on Thursday Please see our video entitled:

“ECB Leaves Rates Unchanged but Lower Rates Are Ahead”

we know from President Mario Draghi’s comments – that lower rates are ahead, together with packages of QE – as yet to be announced. We suspect September may indeed see a rate cut into negative territory as current ECB rates are resting at 0%.

Silver painted a slightly differing picture last week – whilst again suffering oscillations, was generally behaving in a more bullish fashion – moving within a band of some 44 cents or some 2.7%

Technically there is strong support at the $16 level and extremely strong support at the $15.50 level, but again considerable resistance at $17, and we have predicted silver’s high for the year to be around $17.50. Again, so much is dependent on interest rates and as far as silver is concerned, negotiations with China which are resuming again next week.

Speaking of next week, we have the most important data announcements for the month without any doubt:

All in all, a potential cacophony of data which will prove a delight to analysts who thrive and enjoy analytical interpretation.

For the rest of us, hopefully a clear insight as to how the American economy is heading and we suspect, that whilst a 0.25% rate cut is almost a given, the FED Chair is likely to suggest that the FED will intervene when necessary with monetary easing but perhaps suggesting that time is not quite upon us. The FED knows that any sharper than expected cuts will lead to its European partners being even more aggressive and therefore negate the benefit of such a move.

One thing we can all be confident of is that we are now facing an environment of lower interest rates which should prove positive for gold and silver, but we have to bear in mind, that the reason for those lower rates, will be falling global demand, and therefore lower silver usage for industrial purposes. However, if we find that trade is not as adversely affected as many fear and that a deal with China can be achieved, then silver demand for Industrial purposes may indeed not be so adversely affected and especially if governments around the world increase public spending on infrastructure as a number have indicated that they will do.

We also have to remember that stock markets also love low interest rate environments (except, as we stated last week, the banking sector of course), and this is an alternative location for investors to place their capital.

So next week we should see some movement in gold and silver prices. Anticipation of the FEDs announcement, on Monday and Tuesday – The actual announcement on Wednesday and then the publication of payroll data on Friday.

The dollar index is already quite high and depending on what the FED does and what Jerome Powell says will affect that index. If we only see a 0.25% cut and a let’s wait and see commentary, we could see the dollar strengthen further. If, however we have a 0.5% cut and or a very dovish FED commentary then the dollar index will fall, and gold and silver prices become the beneficiary.

Our view is that a path between the two will occur – a 0.25% cut plus a wait and see but willing to help the economy when needed statement given and perhaps a side reference to future cuts ahead. Its important for the Fed and Jerome Powell’s own future to keep the stock market rising, the wheels of commerce turning and the warm glow of support from a President whose catchphrase is “You’re Fired”.

“ECB Leaves Rates Unchanged but Lower Rates Are Ahead”