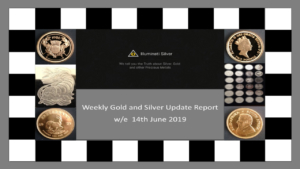 We ended last week’s video with the words:

‘So next week we may indeed see a pullback certainly of gold prices initially and especially as the Mexican tariff threat has been removed. That said, it is quite possible that both gold and silver may only use that as a pause before higher prices are on the horizon.’

Well gold immediately fell on opening, bottomed on Tuesday, and then rose until it peaked on Friday, and then fell back again, more or less to the same level that it closed the previous Friday. So, let’s take a brief look as to what happened.

Firstly, a fall on Monday was not surprising in view of the rise the previous Friday. On Tuesday and Wednesday, we saw pretty benign economic figures – Producer Price Index and Consumer Price Index were just 0.1% and Core CPI was 0.1% vs a forecast 0.2% – all pointing to a potential decline in interest rates sooner rather than later.

Although the Retail Sales were good, but softer than expected, there were upward revisions to the previous months thereby lifting short term yields, resulting in the commensurate rise in the dollar and the fallback in gold prices.

From a technical analysis point of view, the near future does not appear positive. Although there is a fast-stochastic crossover buy signal, the current level of 82 is above the overbought level of 80 and suggests a correction. The MACD has a declining positive trajectory which suggests consolidation as opposed to any major move either way.

There is strong resistance technically at $1350, and strong support at $1325, any break above or below these levels will at least give a short-term indication as to where prices are heading over the following week.

What was amusing to us was that when gold moved above $1350 all of the usual pumping suspects came out stating ‘this is it’ the start of the new bull market and that its coming fast. We do wish that perhaps they studied the markets a little more closely rather than just expressing what they wish will happen.

Yes we see some underlying strength but this could be countered overnight – much depends on the greenback and as we have said time and time again, when compared to other currencies we foresee it remaining strong – the important issue is will the US and China resolve their differences?

If they do, watch for a major correction downwards in gold and a considerable spike to equity markets- if not then we shall have some indecision as traders try to calculate exactly how much damage is being done to the economy and whether the FED will actually lower rates soon.

Recent YouTube videos of ours show that markets have been pricing in a 100% chance of lower rates in July. If this does not happen, we can see precious metal prices dip almost immediately.

We should also not forget the situation with Iran and North Korea – please keep those issues in the back of your mind.

Silver more or less traced golds movements but lost ground by the end of the week. We have hit that important 90:1 GSR level which some pundits claim is not sustainable, and we are even predicting a 91:1 if not higher, very near term.

From a technical point of view there is considerable resistance at the $15 level and although silver did surpass this it could not hold onto those gains for long.

As we have expressed many times before, the battle that is being witnessed, is the one between silver being downgraded from an industrial point of view, because of growth fears, and upgraded as a monetary metal point of view, and for the moment, no decisive direction dominates.

Whilst our channel is essentially about silver, as things stand, for the moment, from a monetary point of view, we prefer gold, as until trade picks up, the industrial uses of silver will continue to dampen any positivity. If perhaps the much-vaunted dollar collapse does not occur and it strengthens further, then expect silver to nosedive back down to $14 and possibly even lower.

We will become positive silver if, and when, we see gold move to $1450; as silver tends to lag gold and we really need to see that head of steam before we will be convinced a turnaround is occurring. Don’t worry, when that time comes, we shall alert everyone, and move our position from neutral/negative to positive silver.

So, what economic data is being announced next week:

So next week it’s all about the FED, so expect some oscillation on gold and silver prices. Wednesday will be crucial, but we are not optimistic there will be an interest rate rise this month.

Jerome Powell may leave his options open for July, though frankly, we believe any rise is more likely to occur in September, or even later in the year.

We are quite happy to sit on the fence and do nothing until the FED Chair has spoken, because we also suspect he will be fully aware of the figures which will be released on Friday, and will base the interest rate decision partially on that.

So, its sit on hands time for a few days, but of course, if you are underweight precious metals, and there are dips, then a small purchase is never going to harm, if you have the long term in mind.

Finally, our Discord Comms Channel is going great guns and Bowman and Greg are doing a sterling job with it. If you have not already joined, then ensure you have signed up as a Free or Paying member of our Inner Sanctum by going to illuminatisilver.com and we will send you a link.