Fiat/Renault merger is not good news for Platinum.

Home/Fiat/Renault merger is not good news for Platinum.

Fiat/Renault merger is not good news for Platinum. 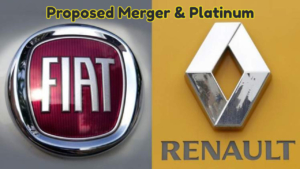 Now we rarely cover mergers between companies and especially in the automotive arena, but we believe it’s a mistake, as such deals suggest to us the future direction of not only the car industry, but other industries as well. It also lends a guide to the economic environment in which we live and will also experience in the future, not to mention its potential longer-term impact on platinum prices.

The proposal suggests that the merged company would be 50% owned by Fiat Chrysler Automobiles (FCA) shareholders and 50% by Renault shareholders and reflects increasing cost pressures on the car making industry as governments set targets for the production of electric cars, with the aim of cutting down on emissions.

A statement said the merged company would produce 8.7m vehicles annually and save €5bn (£4.4bn) for both companies each year by sharing research, purchasing and other activities and suggested that no production plants would close as a result.

Now we are not going to pretend that we are experts in this Industry sector though one of us have actually advised a Motor Car Group in the past. But what is interesting, is that Fiat Chrysler’s portfolio includes brands such as Abarth, Alfa Romeo, Chrysler, Dodge, Fiat, Jeep, Lancia, Maserati, and Ram Trucks. The Renault Group itself consists of 5 main brands: Renault, Dacia, Renault Samsung Motors, Alpine and LADA brands which the company claims fulfils the needs of their customers in different markets.

This merger, if it occurs, would produce a global automotive leader, with 8.7 million vehicle sales, and based on sales, the new company will be number four in North America, number two in the region which covers Europe, the Middle East and Africa and will be the biggest in Latin America.

The new company will be based in the Netherlands and will be listed on the Milan, Paris and New York stock exchanges. The proposal is yet to be considered by the Renault board.

It’s worth noting that Renault already has an alliance with Japan’s Nissan, in which research costs and parts are shared. The companies own shares in each other, too. Renault owns 43.4% of Nissan’s shares and Nissan owns 15% of Renault.

So why is this relevant to us examining precious metals and platinum in particular? Well on the face of it very little. However, it does mark a trend of global company shifts. There is no doubt that New entrants in the motoring sector such as Tesla, as well as cash-rich companies developing driverless technology such as Amazon and Google-owned Waymo, are putting pressure on older and often heavily indebted carmakers to keep up.

Electric cars, or some type of similar variant technology, are increasing in popularity, and will more than likely completely replace the type of vehicle we have today in the not too distant future. Diesel cars are already on the way out.

This move will completely reshape the motor industry, thereby in the first instance result in similar mergers occurring for the sake of cost cutting and survival. The next stage is that new entrants to the marketplace will find it easier to produce motor vehicles with less labour-intensive factories which in itself will have an effect on employment levels.

Those low-cost Labour environments such as China and the Far East will not be able to dominate markets where labour intensity is in decline, which is why the protection of intellectual property and technology rights are so very important.

So, there is the serious danger and or threat of considerable unemployment from this industry alone. The perceived wisdom suggests that For every 60 million vehicles that are built, you need to employ 9 million people currently, and the world is producing around 100 million vehicles a year of which around 75% are cars and we haven’t even mentioned the impact already experienced on employment levels through the advancement of robotics.

With that in mind, in spite of what Fiat claim, such amalgamations will ultimately have an effect on jobs – after all, it is the cost of labour which generally makes up the major financial ongoing commitment of such companies.

So this is one potential impact on precious metal demand. The second and most obvious and imminently important is that the auto industry is the largest consumer of platinum, accounting for roughly 40% of total demand for the metal. Platinum is used by carmakers in catalytic converters, which help reduce poisonous emissions from vehicles.

The problem for platinum is that it isn’t required in the production of electric cars. As the market share and popularity of electric cars rise, platinum demand is expected to struggle, and prices could indeed fall.

Gas-based vehicles make up roughly 80 percent of the market currently, but that amount is expected to drop to 40 percent by 2040. Meanwhile, the market share for diesel vehicles is seen dropping from 20 percent to 5 percent in the same period.

It is our contention that the pace of technological growth will move these industries to merge much faster and the transfer to electric type vehicles increase. The issue which may slow down the pace somewhat, is the lack of places where such vehicles can be charged, and also the relatively poor performance of such batteries in holding a sufficient charge to cover a serious number of miles.

In conclusion, we should be mindful that globalisation where companies are merging with one another to gain economies of scale, and in some cases to survive, is increasing. This will undoubtedly have an impact on worldwide employment levels, though for the moment they appear to be improving – but for how long?

This globalisation will not only have an effect on jobs but the political and economic power of corporations and their impact on domestic policies. China may indeed find itself in a position where its labour cost advantage is eroded and therefore it has to compete on other grounds.

The effect on the platinum Industry is likely to be considerable medium to long term and unless a substitutional use can be found for it, it may in fact prove to be the ‘dog’ within the precious metals industry.

We are preparing a substantive podcast on platinum within the Inner Sanctum which should be published in just under a fortnight or so – however we are not giving away any trade secrets where we say that its future does not appear that bright, and to some extent supply issues and restrictions have managed to hold its price where it currently stands which today is a little over $809 oz.