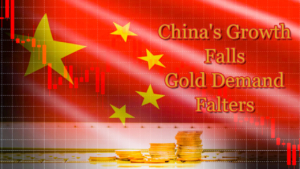 China has been one of the most frequent countries we at illuminati silver regularly refer to. There are a number of reasons for this, not least being that:

Plus, an array of other issues which have an impact on China’s importance to the US and world economy.

Anyway, it is reported today that official figures show that In the three months to June, the Chinese economy grew 6.2% from a year earlier – its slowest pace of growth since the early 1990’s and is 0.2% less than that reported for the first 3 months of 2019 – 6.4%

Now before anyone panics, it has to be said that these figures were in line with expectations and on the positive front for China, Industrial production rose 6.3% in June from a year earlier, while retail sales rose 9.8% year-on-year – both above the forecasts given in recent Reuters polls.

We reported only a few weeks ago that China, recognising its growth slowdown, has already announced plans to cut taxes and boost spending as well as reducing the amount of cash banks must hold in reserve – thereby improving liquidity within the system. We also of course cannot rule out any interest rate cuts or further currency devaluation if necessary.

Now, many will be asking, and quite rightly, if these figures meet forecasts or expectations, then why are they worth commenting on. There a 3 main reasons for this:

Lawrence (Lawrie) Williams is a well-known London-based writer and commentator on financial and political subjects specialising in precious metals news and commentary. He is a qualified and experienced mining engineer having graduated in mining engineering from The Royal School of Mines, a constituent college of Imperial College, London – recently described as the World’s No. 2 University (after MIT).

‘China has been recognised as the world’s largest consumer of gold for around the past seven years, but while the latest figures still confirm the nation as the world’s No. 1, 2019 demand looks to have been the lowest for around five years.  Indeed, if the country’s buying slump continues, 2019 may prove to be the first sub 2,000 tonne total gold demand year, based on SGE gold withdrawal figures, since 2016.

June Shanghai Gold Exchange gold withdrawal data certainly seem to confirm a downturn in Chinese gold demand so far this year.  This should not really be too surprising given the apparent effects of President Trump’s tariff impositions on Chinese imports to the U.S.  This latest data may well give some advantage to the U.S. in its recently resurrected trade talks with China given that it appears the U.S. President’s tactics may be beginning to have an effect on the Chinese economy, and on disposable incomes within the Middle Kingdom.  But whether this is likely to be sufficient to stimulate concessions from the Chinese to meet U.S. demands is rather less certain.  There is face-saving on both sides to take into account in such negotiations and saving face is perhaps more important in Asian cultures than in the West!

We have been consistent over the past few years in equating Shanghai Gold Exchange gold withdrawal data with the country’s overall total gold demand – a sometimes controversial view.  This data is much closer to the known levels of China’s own domestic gold production plus known and unknown gold imports plus an allowance for scrap conversion than are other estimates of Chinese gold consumption. These latter seem to ignore gold imported by the financial sector and restrict demand estimates to industrial demand (including jewellery and artefacts) and investment.  These cumulative figures appear to fall hugely short of known Chinese gold flows.

At the half-year point, withdrawals are over 23% down on the 2018 six months figure and over 30% down on 2017.  It should also be noted that both the 2017 and 2018 full year gold withdrawal figures ended up well short of those for the record 2015 year when full year SGE total gold withdrawals came to nearly 2,600 tonnes.’

Now the pumpers fail to mention this report – we have searched quite extensively and its virtually unmentioned. Now we all accept that this situation could change, and it does acknowledge that china is still one of the largest importers of gold, but one has to ask, can it continue to be if prices continue to rise and China’s economy falters further.

We shall have to wait and see, but it is this area that interests us most when we report on China in addition to its trading impact on the rest of the world.

Sharpley Pixel do end their report with the comment:

‘As far as global gold demand goes this still remains at a high level despite the Chinese fall-off.  Indian gold demand has been showing something of a pick-up so far this year, although official import figures may suffer in H2 given the recent raised tax level on precious metals imports.  (This may be countered by increased levels of smuggled gold, but this would not appear in official data and thus would be invisible in national statistics!).  India used to be the world’s biggest gold consumer until China overtook it but remains hugely important given a national propensity to gift and hoard gold in big quantities.

Anecdotal evidence suggests good continuing demand in Europe and the Middle East.  Central Bank gold demand continues at a high level too, so overall supply/demand fundamentals may be little affected by a fall-off in physical demand from China.  However, should the Chinese demand drop be sustained it will likely affect sentiment towards the yellow metal so we will need to watch future month SGE withdrawal data carefully.’

Sentiments with which we fully agree. What’s your view do share.