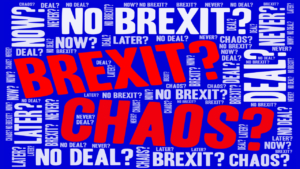 Today we are  commenting on an article written by one of our contributors, Dr Richard North entitled ‘Brexit: predictions set to panic?’

In this article Richard points out that a leaked Government document highlights the potential carnage that could ensue in the event that a hard Brexit takes place on 31st October 2019 – which is the date the UK is technically compelled to leave the EU.

He asks what are the motives behind the leak, and are they all that they seem. We also give our views at the end of the article.

When at the very beginning of August, Sky News published details of a leaked government document on the potential impact of Brexit, I wrote at the time that I was not very impressed by some of the predictions, which seemed way off the mark.

Now, The Sunday Times is having a go, releasing more details of what it says is the government’s classified “Yellowhammer” report. This, in a relatively short document sets out the government’s no-deal Brexit planning assumptions.

Apparently compiled this month by the Cabinet Office, we are told, offers a “rare glimpse into the covert planning being carried out by the government to avert a catastrophic collapse in the nation’s infrastructure”, with the leak laying bare “the gaps in contingency planning”.

The document, marked “official-sensitive”, states that the government expects the return of a hard border in Ireland as current plans to avoid widespread checks will prove “unsustainable”. This, it says, “may spark protests, road blockages and ‘direct action'”.

It also expects that logjams caused by months of border delays could “affect fuel distribution”, potentially disrupting the fuel supply in London and the southeast of England, while up to 85 percent of lorries using the main Channel crossings “may not be ready” for French customs and could face delays of up to 2½ days.

Significant disruption at ports is expected, likely to last up to three months before the flow of traffic “improves” to 50-70 percent of the current rate. The petrol import tariffs, which the government has set at zero, will “inadvertently” lead to the closure of two oil refineries, 2,000 job losses, widespread strike action and disruptions to fuel availability, while there will be passenger delays at EU airports, St Pancras, Eurotunnel and Dover.

As to medical supplies, these will “be vulnerable to severe extended delays” as three-quarters of the UK’s medicines enter the country via the main Channel crossings. Furthermore, the availability of fresh food will be reduced and prices will rise. This could hit “vulnerable groups”.

The government also expects potential clashes between UK and European Economic Area fishing vessels amid predictions that 282 ships will sail in British waters illegally on Brexit day. And, back home, there may be protests across the UK, which may “require significant amounts of police resource[s]”.

Then, rising costs will hit social care, with “smaller providers impacted within 2-3 months and larger providers 4-6 months after exit”, while Gibraltar will face delays of more than four hours at the border with Spain “for at least a few months”, which are likely to “adversely impact” its economy.

With these things and much more, however, one wonders why Johnson and his government are so keen to pursue a no-deal. The situation without a deal looks to be a distinctly poor proposition.

Looking in detail at one aspect of the planning scenario, it is assumed that, in respect of the Channel ports, France will impose EU mandatory controls on UK goods on day one, having built the infrastructure and IT systems to manage and process customs declarations and to support a risk-based control regime.

It is then anticipated that 50-85 percent of HGVs travelling via the short straits may not be ready for French customs, which could reduce the flow of HGVs to 40-60 percent of current levels within one day.

Furthermore, the worst disruption to the short Channel crossings might last three months before flow rates rise to about 50-70 percent of current flow rates (as more traders get prepared), although disruption could continue much longer. In the event of serious disruption, however, it is anticipated that the French might act to improve the flow.

Nevertheless, it is expected that disruption to Channel flow would cause significant queues in Kent and delays to HGVs attempting to use the routes to travel to France. In a reasonable worst-case scenario, we are told, HGVs could face a maximum delay of 1½-2½ days before being able to cross the border. HGVs caught up in congestion in the UK will be unable to return to the EU to collect another load and some logistics firms may decide to avoid the route.

We then learn that “analysis to date” has suggested a low risk of significant sustained queues at ports outside Kent that have high volumes of EU traffic. But we are assured that the Border Delivery Group will continue to work directly with stakeholders at those ports to support planning readiness.

From the way this evaluation is couched, it appears to be a fuller version of what we were seeing in a presentation slide in early August, with great similarity in the outcome. However, it is also very clear that we are being schooled to look at a worse-case scenario, the nature of which the planners are seeking to avoid.

Lacking here are any details of the mitigation measures that have been and are being implemented on both sides of the Channel. And, on that basis, one might expect that the authors of the “Yellowhammer” report are setting out a scenario that they do not (or no longer) expect to happen.

Much of what we’ve been told in recent weeks goes toward ensuring that, whatever customs, etc., measures are imposed on the border, every effort will be made to ensure that the traffic continues to flow, and that queues (on either side of the Channel) are avoided.

The scenario posited also neglects to allow for action taken by shippers and carriers in the first few days and weeks, voluntarily to hold back goods until the situation is clearer, and the clearance procedures are better understood. Should that happen, with the implementation of mitigation measures, there is no reason to believe that there will be significant congestion on the Channel route – certainly in the first few weeks.

One wonders, therefore, what the motivation might be of the person or persons who have leaked the report. One possibility is that they are trying to fuel enhanced concern about the effects of a no-deal, in the hope that MPs focus harder on trying to avoid crashing out without a deal.

On the other hand, we could be looking at an elaborate double bluff, in anticipation that Johnson’s supporters will dismiss the planning assumptions and the scenario projections as “Project Fear”, and discount them. When they fail to materialise in the immediate aftermath of Brexit, this will be taken as confirmation, leaving the way free for Johnson to hold his election without losing the support of his target voters.

Those who have a pessimistic bent, and the many hard-line remainers who oppose Brexit, will readily believe any worst case scenario that is fed to them. Many leavers. on the other hand, are imbued with a blind optimism which will allow them to reject such scenarios. They simply will not believe them.

As a result, the release of uncomfortable predictions will have little effect on the current level of Johnson’s support. But if they then turn out to have been exaggerated – even in the short-term – this could play to Johnson’s advantage.

In some respects, though – as we saw in early August – one might also suspect that the civil servants engaged in compiling predictions do not have a very good grip of the situation.

In the section on “food and water”, for instance, they tell us that certain types of fresh food supply will decrease. Critical elements of the food supply chain (such as ingredients, chemicals and packaging), they also say, may be in short supply.

Yet, they tell us, in combination, these two factors will not cause an overall shortage of food in the UK. They will simply “reduce availability and choice and increase the price”, an effect which will be felt greatest by “vulnerable groups”.

An issue here is that panic buying does not merely “disrupt” food supplies. It strips supermarket shelves bare, more certainly than if a plague of locusts had descended on the land. And the scenario we are being presented with is one set to trigger precisely the panic buying that could do this.

That also applies to fuel supplies where we are told that traffic disruption caused by border delays could affect fuel distribution in the local area, particularly if traffic queues in Kent block the Dartford crossing. This would disrupt fuel supply in London and the southeast and, we are advised, “customer behaviour could lead to shortages in other parts of the country”.

Not only that, we are being told that supply chains for medicines and medical products rely heavily on the short straits, which makes them particularly vulnerable to severe delays: three-quarters of medicines come via the short straits – another trigger for panic buying.

To see panic buying of both food and fuel, and medicines as well, would have a devastating and immediate effect on the economy and create a crisis atmosphere in the country at large. This would possibly ruin any chance Johnson might have of winning a snap election in the immediate aftermath of Brexit.

Perhaps this is the real motivation – or perhaps not. In these febrile times, anything goes and the more we learn the less we know.

Our view on this article is that we suspect Richard is right. Those of us who believe that a Brexit from the EU is in the long-term interests of the UK do appreciate that there will be some short-term economic consequences. To deny that is placing one’s head in the sand. The uncertainty alone that a hard Brexit would bring will in itself, provide a level of disruption, minor chaos and potential panic buying. Perhaps once many of the feared ramifications then fail to materialise a more normal consumer behaviour will follow – but there is not doubt that there will be an element of panic.

That said, and Richard points this out, that panic will be intensified by the ‘Remainers’ issuing no end of ‘reasons to panic’ statements in the hope that, last minute, a decision to leave could be either reversed, stalled or renegotiated.

We are aware that the Labour Party has every intention of calling for a No Confidence Vote in the Boris Johnson Government when parliament returns from its Summer recess on 5th September. If successful, and it appears that it might be, Johnson or the Conservatives will have less than 2 weeks to reform a Government which has majority support, or a general Election will have to be called.

It is hoped by the labour party that this will happen, they will win and demand a new referendum recommending to the public to remain within the EU.

Now there are many imponderables there and hurdles to overcome but that is the intention, and supporting that, it is hoped, by the Remainers, that there will be so much panic driven into the hearts, minds and souls of the British Public that a general election result will be a victory for those parties, particularly the Labour Party, calling for the abandonment of EU withdrawal.

For those of us who purchase precious metals and the value of sterling being important to its price have to bear in mind, that while this turmoil and confusion exists, sterling will remain weakened and could very well weaken further.

Ironically, the greater the likelihood of a ‘hard Brexit’, such will be the level of fear, we could even see sterling hit 1.15 to the dollar if not lower – it currently stands at 1.21.