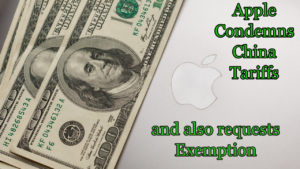 We have all seen in recent days the results of what many believe to be an impending global economic recession. Central banks have either lowered or promised to lower interest rates or adopt QE measures should circumstances require it; Governments have proposed safety nets for those industries that are being hurt by the economic slowdown, and companies have either gone into liquidation or scaled back investment programmes because of future uncertainty.

Now let’s be clear about this. President Trump is using the tariff policy for three reasons:

Now whether you are in favour of this strategy or not, or whether you believe it will work or not, what is certain, American companies are hurting today and virtually all of the International Financial Institutions are claiming that this policy is damaging global trade.

Now we do our utmost not to ‘sit on the fence’ in these matters, but ironically, we can see both sides. If there are no consequences, what is the incentive for an opponent to negotiate?

Equally, if the tariff impositions just lead to retaliation and damages your own country’s businesses and this goes on for too long, then the strategy not only fails but causes, in some cases, irreparable damage. So, it is to be fair a judgement call, of which timing is a crucial element.

Now we all can hypothesise which is right or wrong, but let’s look at the comments from some of those companies which are affected and look at their concerns.

Just this very morning for example it has been reported that Apple has sent a letter to the White House urging it to drop the China tariff plan. This is the plan where the US has said it may impose duties on $300bn worth of Chinese products if the two sides can’t reach a trade deal.

The reason Apple gives for this ‘urging’ is that the duties would “tilt the playing field” to its global rivals.

The company is concerned that the proposed tariffs would cover its major products including iPhone, iPads and Airpods, as well as parts used to repair devices in the US. The irony is that tariffs imposed on companies like Huawei for example, would be little affected as they do not have a “significant presence” in the US market.

But apple is not alone in this request.

It is joined by other tech companies too which joined together in a public filing asking that their products be excluded from the list of goods the tariff would apply to. In addition to Apple we have; Dell Technologies, HP, Intel, Microsoft, Sony and Nintendo.

Non tech companies are also affected. We have mentioned in previous YouTube videos how Soya Bean farmers were affected by Chinese retaliatory tariffs so much so that the amount of soya beans sitting in storage in the US hit a record high of 3.7 billion bushels in December, equivalent to 80% of the 2018 harvest, and that is according to data from the US Department of Agriculture. But these tariff concerns also extend to footwear.

Last month, A letter signed by 173 companies, including Nike, Adidas, Clarks, Dr Martens and Converse, stated that the President’s decision to raise import tariffs will affect the working class and warned that higher levies threaten the future of some businesses. They add in their letter that while the average US tariff on footwear is 11.3%, in some cases it can reach as high as 67.5% and they quote:

“Adding a 25% tax increase on top of these tariffs would mean some working American families could pay a nearly 100% duty on their shoes……..This is unfathomable……..It is time to bring this trade war to an end.”

There are many other examples of companies adversely affected and we saw just on Wednesday that the FED is now expecting US growth next year to fall below 2%, part of which is the increasing recessionary pressures these tariff tit-for-tat policies are having.

In just 1-week time the G20 summit will start in Osaka Japan and conclude on 28th June. It has been reported that President Trump and President Xi of China will have an extended meeting during this summit to discuss trade and tariffs. Mike Pompeo has already travelled to China to pave the way and delegations have been working behind the scenes.

Whether a solution can be achieved by then is unknown, if unlikely, but one thing we are confident about is if there no deal is either reached or likely, and the Iran situation continues to intensify, (as we have heard overnight that the President pulled back on a military strike last minute), then we can see gold prices rise another $50, but if both of these situations are resolved, then stocks will go on a tear and gold prices will fall back.