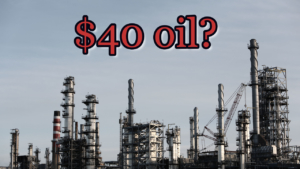 We have stated for a number of years that Brent Crude oil prices should oscillate between $50 – $65 and WTI some $5 – $6 lower dependent upon supply and demand issues; thereby enabling all suppliers, including the US fracking industry, to maintain profitability while at the same time proving acceptable to business as a whole.

Now it will come as no surprise to our members, as we have produced a number of videos on the subject, that Saudi Arabia could produce oil at $10 a barrel and still engineer some profitability – but that is a fortunate position for them and not equalled elsewhere.

We also are aware of the fact that the oil market prices are more or less agreed – some say rigged – by OPEC – an oil cartel generally, though not always, agreeing prices via supply restrictions or increases.

But the world is changing. Technology, including car technology is gradually moving towards electric power and other businesses are looking at ways of reducing their dependence on oil – and so the future of oil demand is in question to say the least – but for the moment, its demand is robust enough to enable most oil producing countries to achieve some level of profitability.

That said, there has been a consequence of President Trump’s policy against Iran which could have a considerable effect on the price of oil in the not too distant future.

On the 22nd April of this year, the Whitehouse demanded that buyers of Iranian oil stop purchases by May 1st or face sanctions, a move intended to choke off Tehran’s oil revenues which sent crude prices to six-month highs on fears of a potential supply crunch.

The result however is that Iran is sending its crude to China where it’s being put into what’s known as “bonded storage.”. This oil doesn’t cross local customs or show up in the nation’s import data and is not necessarily in breach of sanctions. And while it remains out of circulation for now, its presence is looming over the market.

It has been reported today by Bloomberg that ‘Tankers are offloading millions of barrels of Iranian oil into storage tanks at Chinese ports, creating a hoard of crude sitting on the doorstep of the world’s biggest buyer.’

This considerable store of oil has the potential to push down global prices if Chinese refiners decide to draw on it, even as Organization of Petroleum Exporting Countries and allies curb production amid slowing growth in major economies. It also allows Iran to keep pumping and move its oil nearer to potential buyers.

So, when sanctions are eventually lifted, this will enable countries such as China for example to draw on these reserves which will potentially lead to a market glut of oil and we all know that economics 101 states that when supply exceeds demand, prices fall.

This oil transference is also increasing, as Bloomberg data shows that at least ten very-large crude carriers and two smaller tankers owned by the state-run National Iranian Oil Company and its shipping arm are currently sailing toward China or idling off its coast. The vessels have a combined carrying capacity of over 20 million barrels.

They can achieve this, and thereby avoid the sanctions issue, in that the bulk of Iranian oil in China’s bonded tanks is still owned by Tehran and therefore not in breach of sanctions, as the oil hasn’t crossed Chinese customs – so it is theoretically in transit.

It is further reported that

“China received about 12 million tons of Iranian crude from January through May, according to ship-tracking data, versus about 10 million that cleared customs over the period. The discrepancy could be due to the flow of oil into bonded storage.”

Bank of America Merrill Lynch sums up the situation quite compactly in a note published in June:

Oil prices are an important component in world trade and economic growth, its also important in the mining sector and has an impact on precious metals – most certainly the profitability or otherwise of companies that mine them.

To what extent $40 WTI will be reached and for how long it may last is difficult to assess at this stage – but one area we are quite confident of in the medium to long term – and we are re-iterating what we have said in previous videos and podcasts, oil prices will, in time reduce, and we believe that ultimately this will be positive for economic growth, though appreciating that certain industries will be adversely affected by such a move.

Meanwhile, it’s a sector worth keeping an eye on, and especially as China enabling this storage to be maintained within its borders, this will do little to reduce tensions with the United States while the two countries are still embroiled in a trade war