Why Gold Will Soon Reach its Sterling All-Time High

Why Gold Will Soon Reach its Sterling All-Time High 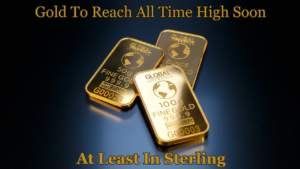 It will come as no surprise to our listeners and subscribers that we have been negative sterling ever since the vote to exit the EU, aka the Brexit Referendum, took place on 23rd June 2016 with 51.9% of those who voted electing to leave.

In fact, prior to the vote, sterling stood at $1.36 and just 2 years prior – before there was any thought of the UK leaving Europe it was as high as $1.70. Well as we produce this video, the sterling to dollar relationship stands at $1.23 and it could fall even further.

As by now most people know, that the UK has changed its Prime Minister – to a much more anti EU individual known as Boris Johnson – we have produced a video on his past and who he is, and placed it in the description below, in case you have not already heard it.

Upon his appointment, he has announced that the UK will leave the EU on 31st October 2019, ‘no matter what’ and if that means a ‘Hard Brexit’ then so be it.

The conventional wisdom is that a ‘Hard Brexit’ will be detrimental to the UK short term, but as Johnson knows, if he does not deliver it, not only will he lose his premiership, but his party, the Conservative Party, will probably never be trusted again by the British people.

Over the weekend, his office and a number of his cabinet and spokespeople have therefore re-issued their determination of ensuring the UK will be out of the EU by the 31st October deadline.

Now the purpose of this video is to look at its effect on the gold price, particularly in sterling terms.

Back to the Referendum date 23rd June 2016, gold stood at £851 a significant high when compared with less than a year previous it was £699. Within one week of the vote, gold rose to £1045 essentially, because of the fall in sterling, and although it had fallen back since, never again has it fallen below £900.

Well, gold is today standing at £1153 some £3 higher than its highest close this year and just some £20 off its all-time high.

So, are we going to see gold in sterling terms break its previous record? You bet we will. The ramifications of a hard BREXIT have not hit home yet, and we see sterling suffering further. Add to that the fact that gold generally may have a little uplift because of lowering rates (not as much as the pumpers are expecting but a raise nevertheless) it is almost unimaginable that we shall not see gold burst its UK record.

By how much remains to be seen, and whilst we have only ever been marginally positive gold in US dollar terms, we have been quite bullish in sterling terms for a number of years, and that sentiment still remains for sterling gold. It may not happen this week, but as the week’s role on and the short-term ramifications of a Hard Brexit dawns, sterling will find it quite difficult to maintain its reasonable recent strength and then we shall see gold rise once again.

Who is Boris Johnson and will he make Britain Great Again?