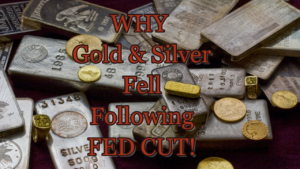 Summarising, it would be fair to say that there are 3 main imperatives which the FED claims to have which will determine any further rate cuts or in fact rises. These are:

Now, whether you believe what the FED says or not, this is the storybook they are reading and against which they are asking the American public, and in fact the world, to judge them by.

An additional important point to note is that Jerome Powell when answering journalist questions made it very clear on a number of occasions that they saw this cut merely as an intervention in mid cycle of an economy and not as the beginning of a number of cuts at the start of a new downward economic cycle. In other words – its for corrective reasons not an emergency ongoing policy.

Now of course he has to say that, but he is hinting, that if there is an economic upturn, because perhaps some of the trade issues are resolved, and consumers do not take fright and global trade turns around, the FOMC could easily raise rates once again.

Now before we talk specifically about gold and silver let’s make one thing absolutely clear. If you are drinking the pumpers Kool-aid please do not waste our time telling us that the FED cannot raise rates because the national Debt is too high. Peter Schiff was saying that when rates were 0.5% and he was wrong for the best part of 10 years. Yes, the argument is right, to some extent, meaning that it would be problematic to move rates much beyond 3% – 3.5% but up to that level it fits well within the central banks plans and economic modelling.

If there was no world recession, the US Fed Funds rate would today be 3.25% – 3.5% because that was the trajectory it was heading for towards the end of last year.

Now back to gold and silver.

We have stated repeatedly that there are many variables which affect the price of gold and silver which is why our channel is more diverse than just talking about shiny gold and silver coins – and we know we have won that argument by the number of channels who are now aping us, and when originally a number set out as just ‘take a look at the latest release of coin a or coin b’ and have since converted to now talking about the economy and politics.

Now we don’t propose to go into those variables again today, but one of the major factors which affect price is the value of the US Dollar, and especially when compared to other currencies.

Now this is the important part. It’s not just the physical dollar value that affects precious metal prices, but also, where traders see the dollar heading that dictates supply and demand.

In today’s modern economic world we know that what we call ‘paper gold’ or ‘paper silver’ – items traded on the Comex for example, has a far greater short term influence than physical supply and demand because of the leverage at which they are traded – often 100 – 200 times for each trade and sometimes even more.

Now these traders are in essence gambling, with their, or their institutions, money; attempting to predict whether prices are going to rise or fall. As gold and silver are globally priced in US dollars, if they believe that the dollar is going to rise in price, they know that will adversely affect precious metal prices and vice versa. And yes, some of them, from time to time, attempt to manipulate the market to their own advantage for the purpose of profit maximisation.

So, what happened yesterday and is continuing today. A number of people are confused, interest rates went down and yet the dollar went up. In fact, yesterday the dollar index rose to just over 98.5 and today its just above 98.7 – so it is strengthening further. Yesterday when we produced our video gold was $1415 and now its $1406 and silver was $16.27 and now it is $16.04.

For those who do not believe this relationship between the value of the dollar and that of gold and silver prices, can see in real time how they are affected – so no more rubbish about this being price manipulation yesterday please – you’re just showing yourself to be financially unaware or argent provocateurs for the pumpers.

As we stated in our weekly update, to a large extent, the 0.25% cut was already baked in – in other words it was expected. It was hoped by the stock markets that the FED may cut rates further or at least suggest that it was on a downward escalator with perhaps another 2 rate cuts minimum this year. The gold and silver community and especially the pumpers were expecting this too. They were hoping the dollar value would fall, gold and silver prices would rise, and they would pump harder causing further rises, and pump harder and even more rises – you get the picture. We could also see this by the number of videos that came out yesterday before the announcement stating that the interest rate cuts would cause precious metal prices to skyrocket – well they didn’t and no it was not surprising in view of the statement which was given afterwards.

The hard fact is, that whereas, you as a listener may not feel that economically you are well off, or better off than 5 or 10 years ago, the cold figures and statistics show that more people are in work, average wages are at last beginning to rise and whilst things are not marvellous, they are also not disastrous either and we can’t help but feel that perhaps listening to too many doom and gloom merchants is having a very different impact upon all of us than it is on the majority of other people who perhaps are more optimistic about the country’s future.

The stock markets didn’t particularly like yesterday’s announcement either and the Dow closed down 333 points at 26,864 but at the time of writing it’s risen some 208 points and is standing at 27,073 – so perhaps they are not quite as disappointed as we may have expected.

So where are gold and silver prices going from here? Well the pumpers will now put out numerous videos – and please notice how so many of them are running common themes – stating that the FED will have to cut rates far more aggressively than they predict, that they are financial illiterates and have completely misunderstood what is going on in the real economy and that gold and silver are still going to rise to $5,000 or even $10,000 gold and up to $1,000 silver any time soon.

Nope it won’t unless, and we repeat what we said yesterday, unless there is military conflict with Iran and or North Korea, there is no trade deal with China and they step up their economic  retaliation and some major financial scandal is revealed which will undermine the economic system.

Otherwise, we may see gold and silver rise from these levels, but frankly, if its more than 10% in 2019 we shall be very surprised. Now we have the job figures coming out tomorrow and if these are well above expectations, then we will see gold dip below $1400 and silver below $16. If not, then there may be a slight recovery.

Please if you take one thing from this video, and we are speaking not only as financial professionals but also gold and silver collectors like you are too – long term they will provide a great hedge against currency depreciation, and also potentially, a capital profit – depending when they were purchased – but please do not expect a global financial collapse or gold and silver going to the moon, certainly not in 2019.

We may be talking a slightly different story as we get closer to the next Presidential election in 2020 – then again maybe we won’t either. Let’s wait and see, and hopefully this video makes it a little clearer as to where we really are.