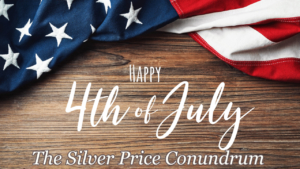 We are all aware that silver has many uses in our society today and some 56% of its demand is taken up for industrial purposes, and the remainder primarily for jewellery, flatware and investment coins and bars.

Like gold, silver is a precious metal, but often plays second fiddle to its bigger brother – primarily because; of the relatively small size of the market, its overall value and also, central banks generally see gold as a monetary metal, and very few if any, actually hold silver.

So, what’s the fascination and attraction? Well at its most simple level, silver is normally described as ‘poor mans gold’. With a gold to silver price ratio of above 90:1, silver is so much cheaper than gold, and in the event of a financial or dollar collapse, silver is divisible sufficiently in size, to make smaller purchases, and therefore is deemed more practical.

Many hark back in the US to 15th August 1971 when President Nixon effectively abolished the gold standard. But true silver historians will quote that the silver standard dates back to ancient Greece, where silver was the first metal used as a measure of currency.

For the first 40 years of its existence, the U.S. operated on a bi-metallic system of gold and silver. However, silver coins were the favoured currency, and domestic purchases made with gold were rare. The Founding Fathers wrote a bi-metallic gold-silver standard into the United States Constitution.

The Coinage Act of 1792 defined a dollar, in regard to, silver. A dollar was to be 371.25 grains of silver, equivalent to about three-fourths of an ounce. This measure was in harmony with the Spanish milled dollar, popular and used at the time as a standardized currency.

In 1834 Congress adjusted the silver-to-gold ratio from 15-1 to 16-1. This adjustment made gold cheaper relative to the world market price ratio. Silver exportation grew, and by 1850, silver coins all but disappeared in the U.S. Gold then became the principal form of currency.

But what is this conundrum to which we refer. Well it’s the constant battle between silver being used as an Industrial metal vs it being demanded as a Monetary metal. The difficulty is this. The world is apparently facing a recession, and so industrial demand for silver is likely to fall – we have seen this in recent years. The industrial use of silver between 2010 – 2013 were over 600 million ounces. In 2014 in fell to 596 million, 582 million in 2015, 566 million in 2016 rose slightly to 585 million in 2017 and fell again in 2018 to 578 million ounces.

As a percentage of total physical demand, Industrial production fell to 56% last year compared to 58% the year before and 60% back in 2010.

However, generally speaking, though it’s not always the case, when silver demand falls industrially, it tends to become more attractive as a monetary metal. So, any fall in price from lack of industrial demand can be made up by an increase in price due to monetary demand.

It is this situation we are witnessing now. The total supply of silver last year compared with total demand provided a net physical shortfall of 29 million ounces; and yet silver is struggling to reach that all important $15.50 level.

So where is its price going from here?

Those who believe that such a high GSR is unsustainable, allude to silver quickly rising to well above $20 in order to  maintain, what they regard, as an acceptable GSR – though if that happens, we had all better worry, as at $20 our friend Harvey Organ believes all banks will collapse. So, let’s avoid that one.

Now if China and the USA do not solve their tariff war, then the industrial demand for silver will fall, and so will its price; but this may upset markets, and cause people to invest in silver because of dollar and stock market repercussion fears.

If China and the US do solve these difficulties, then industrial demand may go back up, but monetary demand may fall as the fear factor is reduced; and so the question is; the conundrum is; which one will have the greater effect (all other things being equal such as Iranian conflicts for example).