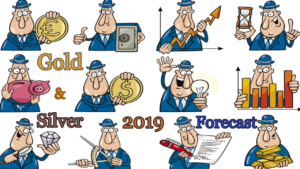 On Sunday, we provided our weekly update which concluded with the following words:

Exciting times ahead and $1600 gold and $18 within the next 3 -4 weeks is not an unreasonable expectation.’

Gold also rose reaching a high for that day of $15.44 but it had been higher the day before at $1554 and we had a closing GSR at the end of the day at 85:1 where both prices had fallen back just a little.

We published a video on Tuesday, which actually gained the most attention in some time entitled;

Now in this video we pointed out that there was indeed potential for both gold and silver to reach these levels and we quoted the reasons why. Which included:

This video was basically created to highlight what could potentially happen given a set of circumstances which we neither extreme i.e. beyond the realms of possibility or cautious.

Now let us add here, if there is military conflict with Iran and or China then of course we shall see these prices skyrocket – but as such ventures are in no-one’s best interests, these black swans are most unlikely to appear.

That said there are other nasties lurking which could indeed have an impactful tailwind behind precious metal prices but no-where near as significant as the Schiff’s and Neumeyer’s and others trying to flog their books and courses or boost their precious metal companies will encourage you to believe.

All this said, what is our estimate of where gold and silver prices will; rise to in 2019 and quite possibly close on 31st December.

Well we have said all along – that we did not expect to see gold rise above $1550 and Silver $17.50. Thereby suggesting a GSR of around 88. We were saying this when the GSR was well below 85 and had not even touched the 92 level it has achieved in recent months.

When it had become clear that the battle between President trump and China over tariffs was unlikely to be settled anytime soon, and that global growth including Germany was slowing and moving into recessionary mode in some countries we lifted these targets to $1650 gold and $18.50 silver – again with a GSR of 88 – 89:1

What we did not account for was Trump’s twitter tirade last week and ratchetting up of tensions with China and including, virtually calling the FED Chair an enemy of the people. This had a profound effect on markets which were already concerned about the 10-year inverted yield curve. It also became clear to us that the FED is likely to have no choice but to lower rates in September and in order to keep markets happy promise at least another cut before the year is out – all of which serves to help precious metal prices.

Now it would be all so tempting to follow the pumpers and give outrageous price predictions in order to click bait our supporters and subscribers – we have already seen that a video even suggesting $1800 gold and $22.50 silver this year has more than attracted twice if not 3 times our normal viewings and we have some of the most discerning viewers and subscribers on YouTube.

Well we are now going to run the risk of disappointing some of you here and we apologise if we do.

Let’s put in a caveat first:

We have said this often – and will repeat it again – President Trump is an establishment disruptor – none of us know until we see the final results whether this programme of activity will be successful or not, which is why we are not particularly keen to neither praise nor condemn him for such moves.

The one thing for certain though is that markets do not like uncertainty and the more there is, the more unstable and fragile they become.

This is just simple fact – and as we do not know the limits to which the President is willing to go to disrupt the status quo, we have to add the caveat that our predictions and forecasts are based on a mix of fundamental analysis, technical analysis, historic precedent, and a strong grasp of geopolitics based upon what normally would happen under normal circumstances. We simply cannot account for a curved ball which no-one sees coming.

Now on that basis, we have to take a look first at the equity markets which at the time of writing are holding up extremely well with the Dow standing at 26,368 up 332 and the S&P 500 standing at 2,918 up 31 points so far today. Part of this of course is also the result of China stating that they wish to resolve its protracted trade dispute with the US with a ‘calm’ attitude. Now we are going to assume that the President will react in kind and perhaps a deal later in the year will eventually be signed – but we are not holding our breath as there is some way still to go.

Secondly the dollar index is above 98 – in fact its currently 98.4 so all of those dollar crash forecasters can once again hang their heads in disappointment that they have not seen Americas economy failing – the dollar is not going to collapse in 2019 nor 2020 even if it does weaken a little – but if anything as we have said so often – it’s the best of a bad bunch and will continue to be until its world currency status is undermined which will take many many years to achieve.

Thirdly gold is already trading at a 6 year high in dollar terms and at all times high in many of the world’s other currencies.

Gold is currently up $300 since May and is testing its 2013 market inflection point at $1550 – and a number of chartists are anticipating a correction.

We should also add to this the fact that historically:

We believe a correction is coming short term

We have also compared gold to other commodities and indices and are also aware that warren Buffets company Berkshire Hathaway is currently holding $100 billion in cash – so he certainly is not expecting the Us dollar to collapse for sure.

Silver in the past few days has been leading the advance. It’s still some way off its near $50 peak back in April 2011 but has risen past a number of resistance points.

And is currently standing at $18.48 struggling to advance beyond that important $18.50 level.

You will observe from those dates that silver’s lows and highs have been much more frequent than golds and volatile. Since 2001 silver is up some 450% but currently trading at 62% below its 2011 high compared with golds 18% reduction. That said the gold to silver ratio currently is 83:1

Utilising this information into our own personal algorithms and allowing for the following factors:

We still hold as in our previous video that $1800 gold and $22.50 silver is a possibility this year but that would be allowing for a furtherance of negative negotiations and political turmoil which we are calculating won’t happen because President Trump has to win the next election in 2020 and to do so he needs a strong economy and not turmoil. 2020 however is another matter and we shall deal with that forecast in a separate video.

Tomorrow we shall give our estimates for gold and silver in sterling terms as sterling has a slightly different dynamic to contend with.

We close on just one point – to the critics out there who cannot wait to condemn if our prediction is say $100 out for gold and a few dollars out for silver. Before you make that criticism – take a look on You Tube and undertake a google search over the past 10 years and compare our forecasts with those of the pumpers – many of whom have been predicting an imminent dollar collapse and $10,000 + gold and $100 – $1,000 + silver for each of those years.

No-one can predict with 100% accuracy of what will happen simply because there are too many variables affecting these prices; not least of which include, human error, greed, and mistakes by politicians, bankers and economists.

But what we can say with a degree of certainty, is that our estimates are based on responsible analysis, with zero vested interest to deceive you, (as this channels survival is determined in large by how close and accurate we are and a genuine desire on our part to guide you the best we can so that you too can make responsible decisions with your hard earned monies.