Gold Rises on back of US/China Trade War Escalation.

Home/Gold Rises on back of US/China Trade War Escalation.

Gold Rises on back of US/China Trade War Escalation. 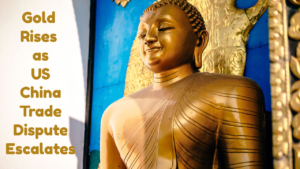 Yesterday we produced a podcast entitled “China US Trade War Escalates – Markets Fall” – if you haven’t already heard it we strongly recommend that you do so, as we would like to think that we were one of the first to discuss this matter before it became overwhelmed by the normal daily news shows. We have placed a link to that podcast in the description below.

We pointed out yesterday that last Friday, the US increased a 10% tariff on $200bn worth of Chinese goods to 25% thereby escalating the ‘trade war’ with China, which then retaliated with imposing tariffs on $60 bn worth of US goods as from June.

Stock markets tumbled with the Dow Jones Industrial Index closing the day down 617 points at 25,324 a fall of some 2.38%. The Hang Seng Index closed down 432 points down 1.5% while most European indices rose albeit modestly.

Interestingly the dollar index closed on Friday at 97.33 and today it stands at 97.34 up 0.01 – interesting that the dollar should strengthen on the back of news that could potentially be very damaging to US and global trade

The purpose of this article is to assess what happened to gold amongst all of this.

Well we remember from our weekly update that gold closed the week at $1286 and opened higher rising to $1303 on the trade conflict escalating, its highest level since April 11th and its largest one-day percentage rise since February 2019 of 1.1% – clearly a run, albeit a small one, to safe haven assets by investors.

Currently at the time of producing this article gold stands at $1298 but does appear to be holding firm but we noted that there was some profit-taking in Asia as prices rose above $1,300

“People are looking to find a safe harbour in the storm while they wait for the dust to settle……Prices could further rise to $1,310-$1,312 if stock markets end lower. But, any sudden breakthroughs in the trade stand-off possibly could see investors stampeding for the exit as fast as they arrived.”

Now to many gold bugs, the failure for gold to continue its rise is indeed disappointing, but to be fair, this trade dispute could also be over in the not too distant future, and as markets tend to look ahead as well as respond with knee-jerk reactions occasionally, the general consensus is that there is too much for politicians to lose on both sides not to eventually come to a satisfactory conclusion.

However Government officials and traders are also conscious and concerned that China being the largest foreign U.S. creditor, may decide to dump treasuries – however we suspect that will not happen with any force, as they would find themselves selling assets at much lower prices – what is more likely is that they do not renew such assets as the current ones mature.

What perhaps is more concerning, and we raised this tentatively in the weekly update, are escalating tensions between the United States and Iran and especially after Saudi Arabia said yesterday that two of its oil tankers were among those attacked off the coast of the United Arab Emirates.

“The Middle East escalation news brings us a step closer to a significant U.S. military reprisal. Fears that China will weaponize U.S. Treasuries in trade war retaliation is scaring the daylights out of markets even if it is unlikely”.

Yesterday, it was interesting to note that the Chinese Yuan weakened to 6.92, its lowest level since Dec. 24. China is expected to intervene to stop any plunge below 7 against the dollar. At the time of writing though it has slipped a little further to 6.89

Silver initially fell on opening and was heading towards $14.60 but soon reversed course and is currently standing at $14.81 up some 3 cents against Friday’s close. We have to be aware of the fact that silver, whilst benefiting as a secondary precious metal, will be damaged by any trade dispute in its role as a primary industrial metal and if these geopolitical issues were not escalating, we would certainly see silver resting at or below $14.50 today.

So, what are your thoughts on the direction for gold. The general consensus is that it will consolidate and possibly firm further and of course rise if tensions escalate vis-à-vis China, Iran and let’s not forget about North Korea either. If these issues resolve themselves, then undoubtedly stock markets would be on a tear, and perhaps gold and silver would be abandoned while that occurred.