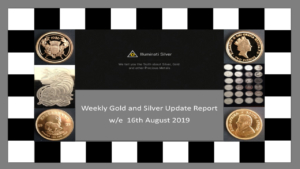 Another fascinating and ‘topsy turvy’ week for our favourite precious metal’s gold and silver.

Whilst the gold price began to dip on Monday, we saw a rapid rise and decline on Tuesday, a rise again on Wednesday which held until Friday and then fell back again.

The week was interesting in that we saw the US announce:

It was also interesting in that we saw the Dow fall some 800 points on Wednesday when the inverted yield curve became apparent though it recovered some 100 points on Thursday and 306 points on Friday though still down some 401 points on the week.

So despite the fall back in price of gold on Friday from Thursday’s 6 year closing high (partly because the Treasury 30 year yield reached an all-time low and the 10 year yield surpassed that of the 30 year yield thus the inversion), it still managed to rise by 1.2% on the week.

From a technical point of view support is seen at the 10-day moving average of $1492 just below the psychological $1500 level and short- and medium-term momentum is positive. That said, the good economic data and to be frank the continual strengthening of the US dollar despite potential future rate cuts will, in our opinion push gold prices down closer to the $1450 level.

That said, we are not blinded to the fact that next week we have the FOMC minutes announced on Wednesday and the FED Chair will be speaking at the Jackson Hole symposium on Friday – so both of these will give markets, hopefully, a further indication of how dovish or hawkish the FED is likely to be.

We particularly wish to point out to our listeners that whilst the pumpers will paint the story, which in itself is not wrong, that lower interest rates favours gold and silver prices, as the opportunity cost of holding them diminishes, it can in certain circumstances also favour stock markets and frankly, if we are to see a resurgence, and we mean a serious resurgence in gold and silver prices, then we really do have to see a major fall back in the equity market.

Our conclusion is that this Trump administration will do all that it can to ensure a buoyant stock market and only if it fails will those hoping for a significant capital gain in the value of their gold and silver holdings be satisfied.

Of course, our proverbial black swans and potential geopolitical conflicts can also have an additional bearing.

Silver markets as mentioned earlier were much more volatile than gold though moving in similar directions. There is significant support at both the $16 and $16.50 levels and weak support at $17 and volatility is again the key word here. Any market anxiety or disturbance could indeed see prices move past $17.50 and possibly touch $18 – we have amended our high for 2019 to $18.50 whereas our start of year calculations set it at $17.50.

Though again as with gold, we believe that they are currently overbought and all things being equal expect to see some pullbacks towards the $16.50 level.

Apart from the FOMC minutes on Wednesday and Jerome Powell speaking on Friday the only other economic data to be announced of some import are:

The one area that could throw all of our calculations out of the window, and one which we have mentioned a considerable number of times these past couple of months, is Iran.

‘Is a UK – US Trade Deal actually a Trade Off?’

which in truth did not get that much attention from subscribers. In that video we pointed out that British Prime Minister, Boris Johnson, and US National Security Advisor, John Bolton, met together, and agreed in principal, a favourable trade deal post Brexit, but we added there was a quid pro quo.

Now perhaps we were being a little too circumspect, but ask yourself the question why is the National Security Adviser negotiating a Trade deal or even discussing it?

We quoted in the video:

Mr Bolton also referenced Mr Johnson’s willingness to participate in Operation Sentinel, which aims to beef up the military presence in the Gulf in the face of tensions between the West and Iran, saying he was “pleased” as this “reflects a change from the prior government”.

We know the British have had their issues with Iran lately and of course john Bolton is one serious hawk where Iran is concerned, and the military have been moving ever closer.

Well just a couple of hours ago it has been reported that the US has issued a warrant to seize a detained Iranian oil tanker, Grace 1, a day after a judge in Gibraltar ordered it to be released.

The Grace 1 super tanker, which is carrying 2.1m barrels of oil, was detained on 4 July on suspicion of illegally transporting oil to Syria.

Two weeks after Grace 1 was detained, on 19 July, Iran seized the British flagged tanker Stena Impero in the Strait of Hormuz.

Although Iran claimed the ship had violated “international maritime rules”, the seizure of Stena Impero was widely believed to be an act of retaliation.

A last-minute legal attempt by the US to keep the tanker detained was rejected by Gibraltar on Thursday.

But yesterday a Federal Court in Washington called for the tanker and the oil on board to be seized. It has also ordered the seizure of $995,000 (£818,000) from an account at an unnamed US bank linked to Paradise Global Trading LLC, an Iranian company.

The Justice Department said the ship and the firm had been involved in violations of the International Emergency Economic Powers Act, bank fraud, money laundering and terrorism forfeiture statutes.

Now it is quite likely that neither the UK or Gibraltarian authorities will act on the Federal Court ruling but the issue is; these increasing tensions between Iran and the US and now the UK.

On 23rd July we published a video entitled:

where we highlighted that

‘Tankers are offloading millions of barrels of Iranian oil into storage tanks at Chinese ports, creating a hoard of crude sitting on the doorstep of the world’s biggest buyer.’ – again this video attracted few views.

None of this is by accident but design. Very often we produce videos, not because we have nothing better to do, but because we believe that a world event, or a political action, can and will, have an impact, if not now, then in the near future, on your and our gold and silver holdings and values.

Sometimes we are privy to confidential information, and other times we can calculate, or best guess what is going to happen. We give you guides, when we are barred from revelation due to any agreements we may have signed, so please, with one or two exceptions, most of our videos are not just reporting what has happened but also have a prophetic relevance.

It is our conjecture at this stage, that the Iranian conflict is in its infancy and that there is much more to come, and when this does happen, we shall indeed see an impact on precious metal prices. Fortunately, there are a number within the Trump administration calling for the President to exercise restraint, but we have a volatile President and a volatile and desperate Iranian Government so just about anything can happen.

So, this aside, next week we foresee volatility in precious metal prices with possibly some downward corrections, but they are unlikely to be significant and if there is a flip to the upside, again we are not expecting a significant move.

Finally, a brief mention about our Discord channel.

We now have over 90 members who are regularly tuning in. If you wish to join discord, where you can see a range of daily articles, have conversations with us and each other and can share information and shortly have access to what will become our weekly discord chat type webinar then please go to our website  and join our Inner Sanctum.

Even free, that is non-paying members, can join discord, as long as you are registered as we attempt to prevent trolls and saboteurs, but you will obviously have greater access if you are a bronze or silver member.

On that front we also this past week offered a 50% discount on the first month’s membership of our bronze and silver inner sanctum and again place both details of the video and the codes you can use in the description below.

Is a UK – US Trade Deal actually a Trade Off?

50offsignup (Please enter in the promo code box on sign up)