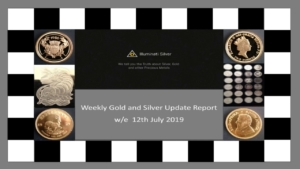 We ended last week’s video with the comments:

‘So, we believe there will be lower gold and silver prices next week, but no significant move until the interest rate decisions are more predictable for July.’

Well gold prices opened down fell to its lowest level on Tuesday and then rebounded primarily on the back of FED Chair Jerome Powell’s Congressional testimony.

So, let’s take a brief look at what he had said:

Firstly, that the economic outlook hasn’t improved in recent weeks:

This immediately resulted in a rise in stocks, and a fall in bond yields, as expectations of a rate cut this month was all but admitted. He added that Economic momentum has slowed in some major foreign economies, and that trade developments, the Federal debt ceiling and Brexit needs to be resolved. He also expressed concern over weakening inflation.

Longer run challenges – such as work force participation rate is lower – and relative stagnation of low- to middle income levels need to be addressed. Also, ways to boost productivity growth should remain a high national priority.

He then embarked on giving a brief history of the FED interest rate decisions not to move rates in 2019 pointing out that the FOMC maintained funds rate 2.25 – 2.5 in first half of this year – and that they would watch the data closely and remain patient.

In May, whilst they saw cross currents adversely affecting the market they could see that things may improve, but more recently, the data has proven otherwise; with growth indicators around the world continuing to disappoint, resulting in a consequent drop in business confidence, all of which could affect the US economy.

So, these remarks have given a very strong indication that interest rates will in fact fall in July. A brief look at the Minutes Summary of the Federal Reserve’s June meeting states:

“Many Federal Reserve officials said they would be willing to cut interest rates if risks and uncertainties continued to weigh on the economic outlook.”

Which is exactly what Jerome Powell has said has happened in his testimony this week.

Now frankly our opinion is that a rate cut is too soon, and they should wait until September. However, the pressure on the FED is considerable, not least coming from the White House and the need to maintain a buoyant stock market which is one of the few areas where economic success can be visibly appreciated. Also, from a banking and economic perspective, it could be viewed as ‘good risk-management’ as it would help cushion the effects of possible future adverse shocks to the economy.

So, we can expect an interest rate cut of some 0.25% on 31st July and the markets have now factored this in.

In fairness to the FED, they can afford to do this. We say that because unlike the UK where interest rates are just 0.75% and the ECB interest rate is 0%, the US can afford to reduce rates by 0.25 % some 9 or 10 times before that 0% rate is reached – which is why it embarked on a policy of attempting to raise rates up to 3% (but didn’t quite get there) in recent years.

The question of course on everyone’s lips is how aggressive the FED will be in reducing rates – will we see a 50-basis point fall and then a pause or perhaps a couple of 25-basis point reductions. We envisage the latter though of course we do not have the same access to the data the FED has – or at least not at the same time.

So of course, on the back of this both gold and silver prices rose as the dollar weakened in anticipation of a rate cut, which is why the dollar index has fallen by 0.47 on the week.

What we should note however, is that gold closed on Friday up almost 1.2% on the week for its highest weekly close in almost 6 years.

From a Technical analysis point of view support is seen near the 10-day moving average of around $1,405 and resistance at just shy of $1440. It must not go amiss however that the short-term momentum is negative as the fast stochastic accelerates lower and the medium-term momentum is at best neutral and at worst negative as the MACD prints red with a downward sloping trajectory.

Silver markets attempted a rally with a strong support level at $15 and potentially equally strong resistance at $15.50

We can envisage quite a bit of toing and froing with silver as any weakness in the dollar will strengthen prices while at the same time any weakening in the industrial economy will have a downward effect on physical silver demand. As we have said quite often in the recent past, if you are under-weight in silver its potentially a good time to buy on dips.

With regards to those who buy gold and silver in sterling, we said in last week’s update:

“We are still quite concerned that sterling has a little further to fall until the BREXIT situation is out of the way” – how prophetic that was when we saw sterling fall to one of its lowest levels for over 2 years and we attach a link in the description below to our YouTube video entitled :

So, what can we expect to see next week:

So, Tuesday is probably the most important day for economic statistics and will be viewed through the lens of whether rates are likely to be reduced by 0.25% or 0.5% on the 31st – though our view is that the former is more likely.

So, in conclusion, it’s a similar story to last week in that China and Iran are important, and the FED having given its clearest indication so far of an imminent rate cut, it will now be a wait and see situation. We suspect that geopolitics will play a greater role next week because of the absence of much economic data beyond Tuesday.

Finally, to all Inner Sanctum members, at long last we shall be able to publish our recent design merchandise which will be available on the website from Wednesday next week, with discounts available to Silver and Bronze members. We wish to add that we are offering these as a token of affiliate-ship as opposed to attempting to make money from them, as many members have requested that we produce some branded merchandise.

The illuminati silver, coin and bar will be available from October (but we hope we can introduce in September) either of which each Silver member who has stayed with us for 12 consecutive months will receive for FREE and others can obtain at a discount. Again, it’s more about brand affiliation and collection as opposed to us being involved in the sale of precious metals – as we fully intend on maintain our objectivity as opposed to encouraging profiteering from sales.

Also, each week, members will be able to log into the website and the discord channel and listen to a weekly podcast between Controversially Greg and Journo Marcus on a range of subjects and we have further podcasts with other luminaries very soon.

We also draw to members attention our Premium Podcasts which will now start rolling out in quite a large stream as the author moved to a new house this past 8 weeks which has reduced the number somewhat – but the deficit will be more than made up.