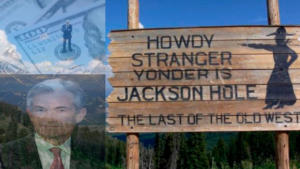 We reported in our video on 1st August entitled

the FOMC reduced interest rates by 0.25% on 31st July and Jerome Powell, the FED Chair, spoke to reporters afterwards in a relatively, but not too, dovish manner.

Well today the minutes from that meeting prior to the interest rate reduction announcement were published today, and this is what it shows:

As we mentioned in our weekly update on Saturday, Jerome Powell will be speaking at the Jackson Hole Symposium on Friday and his comments will be closely monitored.

Some commentators such as Capital Economics economist Paul Ashworth said last week that the remarks could “trigger carnage in the bond and equity markets” if the public statements fail to appease market demands for clear signalling in favour of easier monetary policy.

Overseas, interest rates have broadly turned into negative territory as a dovish bias overtakes international monetary policy amid slowing global growth. In Germany, the government sold 30-year bonds with a negative yield for the first time ever today with a value estimated at $914 million with a zero-coupon rate. It is further estimated that so far there is in excess of $15 trillion worth of negative-yielding bonds currently worldwide and this is expected to increase.

The dollar index is 98.31 and some company reporting today has in fact been moderately positive. Of course, President Trump has been tweeting again and stating that the FED needs to reduce rates by at least 0.5% and soon as the taunts of ‘recession’ coming from economic pundits and his old former supporters such as Scaramucci are beginning to worry him.

So, Friday is the important day for sure but lets not forget that tomorrow we have the Markit Manufacturing and Services PMI Flash data for August – which could also have an influence.

Of course, we shall produce a video on Friday’s Jackson Hole Symposium with a complete analysis.