ECB Leaves Rates Unchanged But Not For Long

Home/ECB Leaves Rates Unchanged But Not For Long

ECB Leaves Rates Unchanged But Not For Long 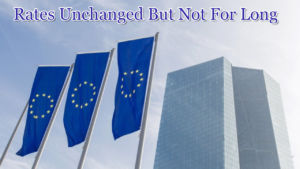 Today, The President of the European Central Bank, Mario Draghi, announced today that the ECB would be leaving interest rates unchanged for now, but could see current levels being maintained or lower through mid-2020.

Now this is a change, as previously he mentioned that he saw rates remaining fixed until at least June 2020.

He also stated during his news conference that

“This outlook is getting worse and worse,” with a rebound in the second half of 2019 “less likely”.

Now the giveaway for us however, as bankers, are his comments on inflation. This is what he said:

“The bottom line … is basically we don’t like what we see on the inflation front and symmetry means there is no 2% cap. Inflation can deviate on both sides.”

Now this suggests, that he is willing to allow inflation to rise above, what was previously regarded as a 2% cap, if necessary – thereby suggesting both lower rates and asset purchases in order to induce some inflation into the economy.

We are looking at this having more focus above 2% as opposed to below because inflation is already well below its target and Germany is facing continuously lower industrial output and the likelihood of the Federal Reserve lowering rates on 31st is almost a given necessitating the ECB to respond in some way.

It has to be acknowledged however that with interest rates already at 0% there is little the ECB can do except QE unless its willing to endure the ramifications of minus interest rates – which in time it may have little alternative but to adopt.

For the moment, consumer confidence, employment and bank lending remain at relatively healthy levels, but there is no doubt that as far as the ECB is concerned, it could be looking at many years of financial stimulus ahead. The Central bank and Governmental approach to potential recessions has changed since 2008.

Prior to this, it was expected to have an economic recession every 7 – 10 years – resulting in corrective monetary policies, and then a gradual new boom occurring – which is why it was known as “boom and bust” economics.

The approach since 2008 has been not to allow the recession to occur – via constantly stimulating the economy where and when necessary and gradually, its only a small step from there before we enter the realm of Modern Monetary Theory – an area we have delved relatively deeply into within our premium Video section of the Inner Sanctum.

The immediate aftermath of the announcement saw the Euro vs dollar fall to around $1.111 but is currently standing at $1.12 whereas before the decision it was $1.13

We wish to make clear at this point that the ECB has quite frankly only limited manoeuvres ahead. As mentioned, interest rates are already at 0%, and its balance sheet is already equivalent to 40% of the bloc’s economic output.

Now it can change its rules on relaxing the limits of Government bond purchases, but these could leave the ECB open to legal challenges. Whereas in the US, with the Fed Funds rate at 2.25% -2.5% – it has quite a few steps ahead as far as rate reductions are concerned before other major asset purchases need be considered.

It is partly for this reason, we have stated for not only months but years, that talk of an imminent dollar collapse is just sheer nonsense and fear mongering certainly at this stage.